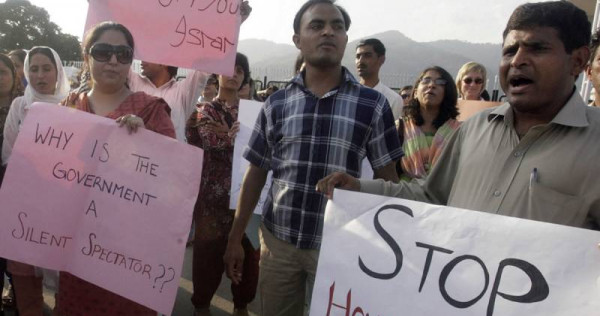 PESHAWAR, Pakistan – Pakistani police have arrested the cousin of two teenage girls whom he is suspected of killing after a video of the girls kissing a man went viral on social media, officials said on Thursday.

Jasima Bibi and Saeeda Bibi, sisters aged 16 and 18, were murdered on May 14 in the former tribal district of North Waziristan in Pakistan’s conservative northwest province of Khyber Pakhtunkhwa in what police say was an “honour killing” after their relatives saw the video online.

“The main suspect has confessed to the murder during investigations and now we will produce him before a judge,” a senior provincial police official, Abdul Ghafoor Afridi, told Reuters.

The suspect is the girls’ first cousin.

Police had earlier arrested the man seen in the video kissing the girls, along with another man whose cellphone was used to make the video, and who police say is the one who uploaded it on social media.

The girls’ father and uncle had been arrested on suspicion of concealing the murder.

Police said the girls’ relatives did not want to bring charges so the state became the complainant in the case.

Thousands of incidents of violence against women perceived to have “damaged” family honour are reported in Pakistan each year and many more go unreported, rights groups say.

In addition to murder charges, police are also using laws specifically meant to curb “honour killings” introduced in 2016, according to a charge sheet seen by Reuters.

Suspects often escape punishment because they are related to the victims, and use a loophole in the law allowing the dropping of charges if two parties come to an agreement over the killing.

In 2016, Pakistan amended its laws in a bid to close that loophole and allow prosecutors to seek life in prison for those suspected of an “honour killing”.