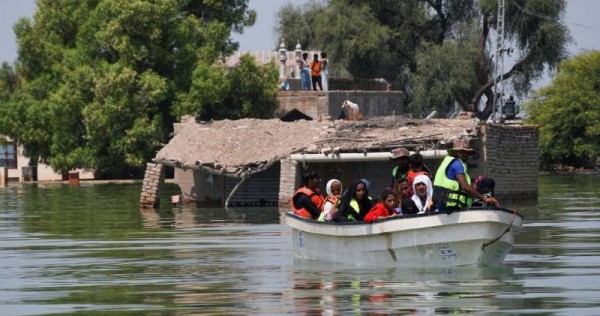 DADU, Pakistan – Authorities in southern Pakistan plan to breach the country’s Indus Highway, a key transport link, to allow water to flow and prevent flooding in the town of Dadu, officials said on Sunday (Sept 11).

Floods from a record monsoon and glacial melt in the north of Pakistan have hit 33 million people and killed at least 1,391, washing away homes, roads, railways, livestock and crops.

Pakistan estimates the cost of the damage at $30 billion (S$42 billion), and both the government and UN Secretary General Antonio Guterres have blamed the flooding, extreme weather and resulting devastation on climate change.

There are at least three points in Dadu district where the Indus Highway is submerged, with traffic suspended for weeks, while Pakistan’s other highway connecting the north and south has also been badly hit by the flood waters.

“All the other floods hit parts of the country are going in(to) rehabilitation phase, but we are still on our toes until and unless these flood waters, hill torrents…finally pass,” Syed Murtaza Ali Shah, District Commissioner of Dadu district said on Sunday, adding this might mean breaching the highway.

UN agencies have begun work on assessing Pakistan’s needs in order to develop a post-disaster reconstruction plan after the country received 391mm of rain, or nearly 190 per cent more than the 30-year average, in July and August.

The southern province of Sindh has seen 466 per cent more rain than average and location of the Dadu district, with a population of 1.5 million, means all the flood waters pass through it.

“90 per cent of the Dadu district is inundated, Dadu town is still under threat we are trying to protect it,” Shah told Reuters, adding that the government had provided all the machinery and material required to build a dike.

More than 200 inmates from Dadu jail have been moved to Hyderabad, as the prison is situated in a depression, he added.

Guterres told reporters on Saturday that the international community needed to do more to help countries hit hardest by the effects of climate change, starting with Pakistan.