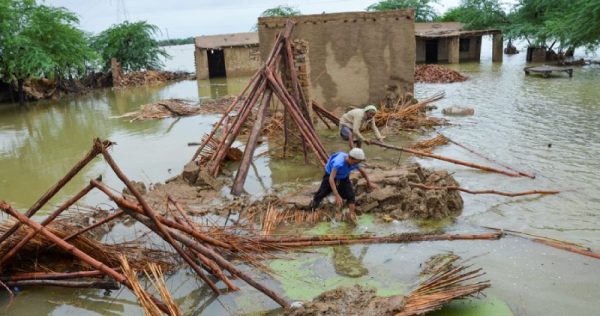 Pakistan has urged the international community to help with relief efforts as it struggles to cope with the aftermath of torrential rains that have triggered massive floods since last month, killing more than 900 people.

“33 million have been affected, in different ways; the final homeless figure is being assessed,” Climate Change Minister Sherry Rehman told Reuters in a text message.

She added that the southern province of Sindh, hardest hit in the last few days, had requested one million tents for affected people.

“South of Pakistan is inundated almost underwater. … People are going to higher ground,” she said.

“Needs assessment is being done, we have to make UN’s international flash appeal; this is not the task of one country or one province, it is a climate-induced disaster,” she added.

Minister for Planning and Development Ahsan Iqbal separately told Reuters that 30 million people had been affected, a figure that would represent about 15 per cent of the South Asian country’s population.

UN agency Office for the Coordination of Humanitarian Affairs (OCHA) said in an update on Thursday that the monsoon rains had affected some 3 million people in Pakistan of which 184,000 have been displaced to relief camps across the country.

Funding and reconstruction efforts will be a challenge for cash-strapped Pakistan, which is having to cut spending to ensure that the International Monetary Fund approves the release of much-needed bailout money.

The National Disaster Management Authority (NDMA) said in a report that in the last 24 hours that 15km of roads had been damaged across the country and over 82,000 homes have been partially or fully damaged.

Since mid-June, when the monsoon began, over 3,000km of road, 130 bridges and 495,000 homes have been damaged, according to NDMA’s last situation report, figures also echoed in the OHCA report.

A vast majority of this damage is in the southern province of Sindh.

“Brother, the rain has not stopped for the past three months. … We are living in a rickshaw with our children because the roof of our mud house is leaking,” a woman who declined to be named told Reuters TV in Hyderabad, Sindh’s second-largest city.

OCHA also warned that alerts had been issued for floods, river overflows, and landslides in several areas of Pakistan, and heavy rainfall was forecast for the next two days, too, over most of the country.

Seated with three of her children in the rickshaw she said: “Where can we go? The gutters are overflowing, and our courtyard is filled up with sewage. Our houses and alleys have turned into a floating garbage bin.”

Rehman said Sindh has received “784 per cent” more rainfall this month than the August average, while the province of Balochistan had received nearly 500 per cent more.

Twenty three districts of Sindh have been declared calamity hit, she said.

Chinese province plans to ban the sale of gasoline-powered cars