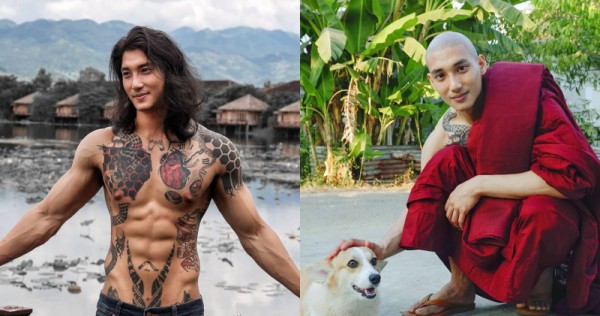 It was a few years ago that British black comedy television series Fleabag gave the world a gift in the form of ‘Hot Priest’. Now, it seems that real life is imitating reel life with ‘Hot Monk’ and it has the internet in a tizzy.

If you haven’t been browsing through your social media feed in the last two days or so, you would have missed out on these pictures of Burmese actor-model Paing Takhon that have gone viral.

It’s not just because he looks drop-dead gorgeous though — there are very specific reasons why people go viral, to be honest. It’s mainly because he is making the internet thirsty even though he has shaved his head, joined the monastery, and was garbed in monk robes.

On his Instagram post two days ago (Jan 12), 24-year-old Paing Takhon shared pictures of his time in the monastery and wrote: “Spent my New Year 2021 by being a monk for 10 days and I felt so peaceful and knew myself more…”

A handsome man who is disciplined, spiritual, and introspective? Well, based on these comments, netizens were definitely interested. Although, a couple of them lamented the loss of his hair.

A quick scroll through his Instagram feed revealed that the university student (yes, he’s still studying) had really luscious locks that he would occasionally tie into a manbun.

And for those who like some scruff, he seems able to grow a decent beard as well.

Paing Takhon started his career as a runway model in 2014 before getting offers for television commercials, music videos and modelling for fashion magazine cover photos. He then made his acting debut in 2017 as the lead in the Burmese film Midnight Traveller and his popularity rose. He was also part of Buzzfeed’s list of “23 stunning South Asian men” in 2018.

The Choi Siwon-lookalike is also said to be popular in Thailand and in September 2019, he was appointed Myanmar’s tourism ambassador to Thailand.