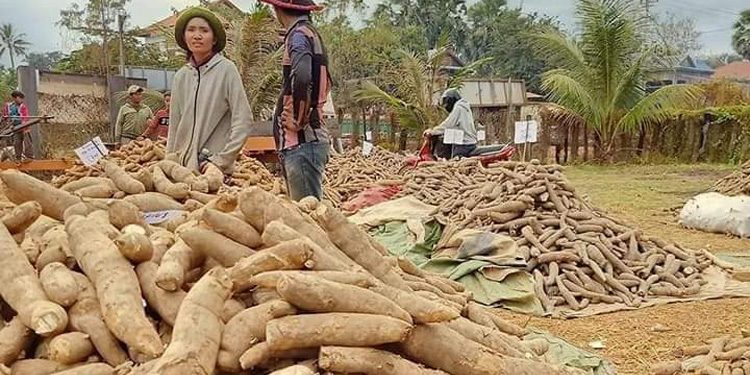 0
SHARES
47
VIEWS
Share on FacebookShare on Twitter
The year’s yield of Cambodia cassava is looking promising as the crops’ harvest season is  already underway.

Kann Kunthy, managing director of the Cambodia Agriculture Cooperative Corp (CACC), said that this year’s cassava harvest began in the third week of December, despite its usually commencing in January. He added that the company will collect 30,000 tonnes of organic cassava in Preah Vihear province.

He added that the harvest season will last through February or March saying, “This year’s organic cassava yield will be six-fold higher than last year’s 5,500 tonnes. So far we have collected around 1,000 tonnes of organic cassava.”

Kunthy said that the company has signed contract farming agreements with 11 agriculture cooperatives. He said that the farmers receive  30 to 35 percent higher prices for their harvests under contract than they would for the prevailing market price.

“We export the fresh cassava to Thai Wah Public Company Limited, which has a processing factory in Vietnam. We export only raw material, meeting the sanitary and phyto-sanitary requirements and provide the certificate of origin and the necessary transitional certificate needed for cross-border shipment,” Kunthy said.

Chhat Chheang, president of Preah Vihear’s Agriculture Cooperative of Romdoul Mlouprey Cheaden, said that his agriculture cooperative has 84 families as members. His cooperative contracted to sell around 1,900 tonnes of organic cassava to the CACC.

“We have started to collect the farmers’ yields now and expect to be finished by mid-February of next year,” Chheang added. “We are earning around 360 riels per kiolgramme now for fresh organic cassava,” he said.

Chheang added that per hectare of organic cassava cultivated, his cooperative is capable of producing between12 to 15 tonnes of cassava.  He added that his members generaslly spend somewhere around $200 per hectare towards their production costs (seedling, fertiliser and maintenance), but they have the potential to earn between $625 and $1,080 per hectare.  “Outside contracted production, the price of cassava is around 300 riel per kilogram,” he added.

Cambodia has 656,868 hectares of cassava currently under cultivation across the country, of which 582,055 hectares are in harvest, according to data from the Ministry of Agriculture, Forestry and Fisheries (MAFF). On average, farmers produce 19.22 tonnes of cassava per hectare and the nations’ annual yield is around 11.18 million tonnes.

MAFF’s data shows that as of Dec 15, Cambodia had exported 7.07 million tonnes of cassava with a total value of around $1.02 billion. The Kingdom’s cassava industry includes 38 exporting companies and nine processing companies. Cassava cultivation in 2021 is anticipated to grow to 660,338 hectares, an increase of 5 percent over 2020.

This article was first published in Khmer Times. All contents and images are copyright to their respective owners and sources.
Tags: CambodiaCambodia cassavaOrganic​ Cambodia cassavaPreah Vihear
Previous Post