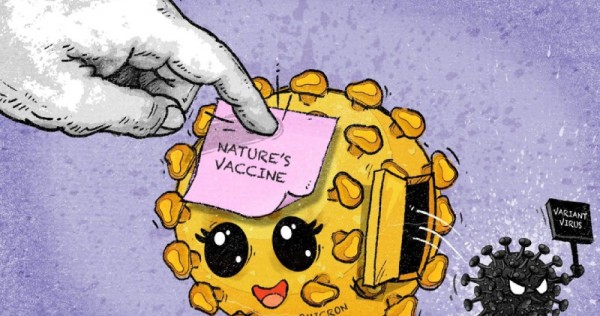 Two months after it emerged, the Omicron variant has ripped through many populations and is rapidly becoming the dominant coronavirus strain.

Global case numbers have hit record levels, but proportionally hospitalisations and deaths are lower than for previous surges, indicating that Omicron could be less severe than other strains like Delta.

That has prompted an optimistic view to take hold that this is a highly transmissible but mild variant that could infect billions and provide the immunity needed to end the pandemic. Or as US Senator Rand Paul put it, Omicron is “basically nature’s vaccine”.

But scientists say this notion is dangerous and underestimates the variant’s impact, and that it is still unclear how much immune protection an Omicron infection provides or how long it might last.

Worse, they say that a highly infectious strain running rampant, especially among the unvaccinated, could lead to more new variants emerging – and potentially another variant of concern.

“The ideal vaccine would be a virulent virus that everybody is infected with and becomes immune to,” said Bruce Levin, a biology professor at Emory University in the US.

“But I am concerned about two things, one of which is that immunity is not complete. It’s not like smallpox or measles,” he said, referring to diseases that provide lifelong immunity after infection.

“The other thing is it has a high R0,” which indicates how contagious the strain is.

Since it was first identified in late 2019, Sars-CoV-2 – the coronavirus that causes Covid-19 – has already produced five major variants of concern, the latest being Omicron. But there is no guarantee that an infection will provide immunity from reinfection, as Omicron has shown.

In other words, it is not nature’s live attenuated vaccine – like the one created in a lab for measles that is too weak to cause symptoms but strong enough to provide immunity.

“I think people are expecting the virus to become attenuated, meaning that it will cause milder disease – but that is not a reliable outcome,” said Dr Jamie Scott, a molecular immunologist and professor emeritus at Simon Fraser University in Canada.

“It doesn’t work, for instance, for the flu viruses because of their constant diversification. And my guess is that it won’t work for Sars-CoV-2 either, based on the repeated emergence of phylogenetically unrelated variants of concern coming out of different roots in the Sars-CoV-2 phylogenetic tree over the past two years.”

The surface proteins of the flu virus – which are known as antigens and can trigger an immune response – constantly change over time as the virus replicates. The mutations result in new strains that are not recognised by the immune system, a process known as antigenic drift, which is why seasonal flu vaccines need to be updated every year.

Drug makers have suggested that the different Sars-CoV-2 variants circulating and potentially evading immunity could mean vaccine boosters are also needed seasonally for the coronavirus, like flu shots.

Being infected with Omicron is also unlikely to provide broad cross-variant antibody protection, according to a new study by researchers in the US, which has not yet been peer-reviewed.

But it did find that Omicron infection improved existing immune protection from a vaccine, the team from the Gladstone Institutes and University of California, San Francisco said in a paper posted on medRxiv.org on Monday.

Scott, who was not involved in the study, noted that immunity from infection waned over time. “It’s clear that so-called natural immunity, produced by natural infection, is highly focused on the infecting Sars-CoV-2 virus and its antibody responses are not lasting,” she said.

“It is not at all clear to me that population immunity that will ‘end the pandemic’ will be achieved by the entire population getting infected.

With that said, as with the flu virus, some level of natural immunity will build in the population, but it is not clear that the rate of severe disease will be reduced as new variants of concern spread through the population.”

Omicron can more easily infect people because of mutations in the spike protein – even among those with immunity from vaccination or infection. It has caused a surge of cases worldwide since it was discovered in late November, with the World Health Organisation last week saying the numbers were “off the charts”.

More than 18 million people were infected in the week to Jan 16, with over 45,000 deaths, according to the UN health agency’s figures.

But international studies have so far found that the risks of hospitalisation and death appear to be significantly lower than for the Delta variant, and described Omicron as “mild”.

However, people may not realise what is actually meant by a mild infection, according to Dr Michael Curry, an emergency doctor and clinical associate professor at the University of British Columbia.

“To an emergency physician, a mild illness is one not requiring hospitalisation. You can go home and will recover without significant risk of serious injury,” Curry said. “You can feel terrible. It can be the worst respiratory infection of your life but as long as you do not require hospitalisation, physicians characterise an illness as mild.”

He added that what he has seen in Canada is consistent with the literature that Omicron seems to have a milder clinical outcome than other variants.

Studies have pointed to Omicron’s mutated spike protein that makes it more likely to infect the upper respiratory tract, causing milder symptoms than other strains that affect the lungs.

Vaccination has also helped to protect against severe disease, according to Bjorn Meyer, a virologist with the Otto von Guericke University Magdeburg in Germany.

But he said a highly transmissible virus was still a cause for concern because of the vast number of people infected, especially the unvaccinated.

“While the numbers of disease severity – and because of this hospitalisation – seem reduced, this seems to be offset by the increase in infection numbers,” Meyer said.

“At the same time, the reduction in disease severity in non-vaccinated people seems to be too small to make big differences on a population level,” he said, noting that hospitalisations have an impact across health systems.

Scientists have also warned that there will be more coronavirus variants to come – and potentially more dangerous ones – as Omicron rapidly spreads, replicates and mutates.

Meyer said another problem was the low vaccination and immunity levels in some places.

“In these settings you would allow more mutations because of a consequence of more infections for longer periods of time, and these viruses could partially escape the immune response of the few vaccinated individuals in these populations,” he said.

“Often it’s a numbers game. The more infections you have, the more viral replication and mutations you have, which give you a higher chance of viruses evading immunity by vaccination. The best strategy is to think globally and to reduce transmission, while increasing vaccination efforts everywhere.”

Levin from Emory University also noted that there would be selection to evade the vaccine. “A mutant virus that evades the vaccine is going to have an advantage.

The mutant virus that evades immunity is going to have an advantage,” he said. “So we’re going to see this continuous arms race between vaccines, immunity and the virus.”

The WHO on Tuesday warned that Omicron would not be the last variant. Dr Bruce Aylward, senior adviser to the WHO director general, said high levels of infection around the world increased the risk of a new strain emerging.

“We don’t fully understand the consequences of letting this thing run,” Aylward said. “Most of what we’ve seen so far in areas of uncontrolled transmission has been we paid a price for the variants that emerge – and new uncertainties we have to manage as we go forward.”