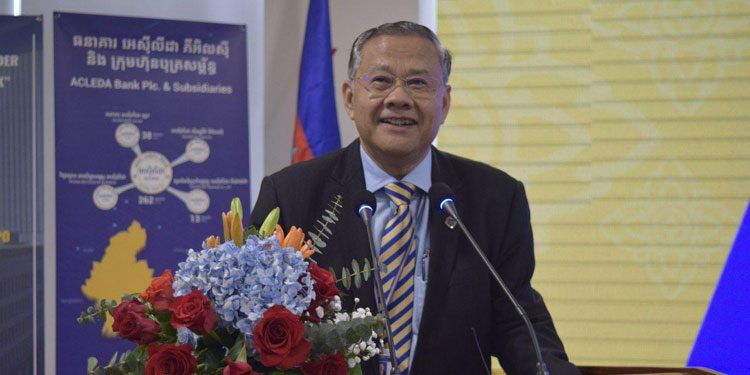 The president of the Association of Banks in Cambodia (ABC) said the banking sector is still healthy with manageable non-performing loans during COVID-19 and recent flooding. The banks are closely monitoring the impact on customers.

In Channy, ABC president who is also president and group managing director of ACLEDA Bank, said that through various government measures and support from the National Bank of Cambodia, in particular, they have helped the financial sector to perform better during the pandemic.

Channy accepted non-performing loans (NPLs) in the banking sector has risen a little but the industry can manage it. “NPLs now are about 2 percent. Before COVID-19 it was around 1.3 percent, so the growth of NPLs is low,” he said.

As of October, the financial institutions have provided loan restructuring to more than 280,000 customers involving about $3 billion, according to Channy. On top of this, data from the Cambodia Microfinance Association (CMA) shows that CMA members have restructured loans for 265,000 clients involving $1.3 billion by mid-October. NPLs in the microfinance sector were 2.5 percent of the total in September.

He said that the recent flooding in the Kingdom has added another effect to the banking and microfinance sectors and customers. However, the banks and MFIs have followed the government’s guidance by restructuring loans to those affected by flooding, especially the agriculture sector.

“The banks and MFIs will provide more loans to customers during this tough time. We have not asked them to pay back the loans during this difficult situation after we found that the agriculture sector – rice and other crops – were damaged but instead, we gave them more money to buy seedling, and fertilisers for replan-​ting,” he added.

The credit growth of ACLEDA Bank this year, in particular, is expected to reach 10 percent. It was 8 percent in 2019. However, this year’s loans given to customers are affordable and deposits are also rising remarkably, Channy said.

“Our loan portfolio last year was $3.7 billion, and so far this year it is $4 billion,” he added.

Prime Minister Hun Sen last Wednesday called on banks and MFIs to understand and delay the repayment of debts of people affected by this year’s floods. He made the call during a meeting with people affected by flooding in Banteay Meanchey province. The premier added: “Banks or microfinances must be understanding about [repayment] delays or reducing interest rates. Especially, no property should be seized during the COVID-19 [pandemic] and the flooding.”