New roads in Sihanoukville give city new lease of life 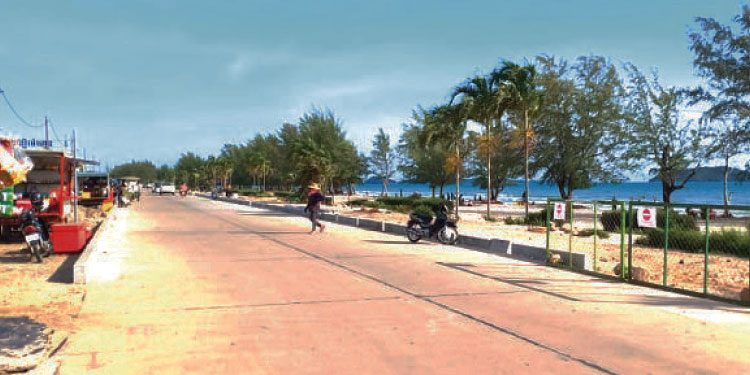 The coastal city of Sihanoukville has recently undergone a $294 million restoration and expansion project of 34 roads, making it more accessible, clean and ready for the return of tourism.

In November last year, the government, with the attendance of Prime Minister Hun Sen, began the work, spanning 82 kilometres.

A key issue in Sihanoukville before the project was the lack of up-to-date, modern roads. Roads in Sihanoukville used to be narrow, small and full of potholes. This never looked good when tourists would pass through.

Not only are Sihanoukville’s new roads helping logistics when it comes to transporting goods to Cambodia’s deepest port, but they are easing overall transportation, hopefully making Sihanoukville a top tourist destination in years to come.

Samantha McLaughlan, project manager of a nongovernmental organisation named Shine, said: “About a year ago roads were a complete mess, full of massive potholes from all the trucks. They were overcrowded and difficult to drive on. In the rainy season we had very bad mud and floods. Traffic would be regularly gridlocked because vehicles were stuck in the roads. Tourists would be shocked when they visited. In Otres the roads are very good now. Some have been widened by three times. There are proper pavements and cycle paths being added. It’s very easy to drive there these days. You can practically drive right along the coast now.”

The roads around Sihanoukville have made it easier for people in the city to get from point A to point B without worrying about damaging their vehicles or having an accident.

“A new road was built from Otres to Sihanoukville airport with beautiful views of the ocean. It’s much quicker to get to places these days and the roads are a pleasure to drive on. I have been told that there are much fewer traffic incidents these days and people feel a lot safer to drive, especially at night. Domestic tourism has increased in the area because Cambodians from all around are coming to enjoy the beaches at Otres and we have a lot of cyclists. It has benefited the local community, who can sell food and drinks from carts to families as they picnic on the beach,” McLaughlan added.