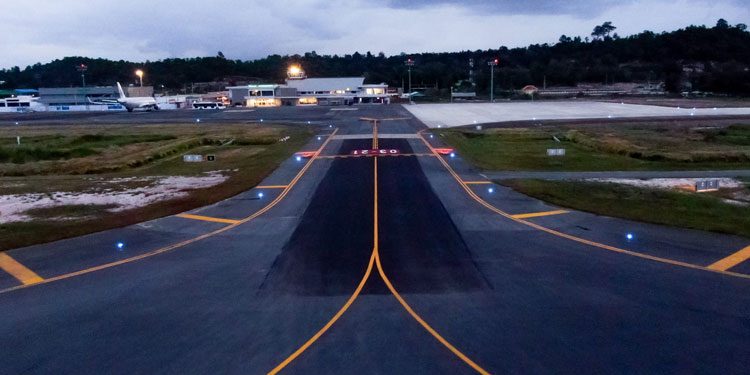 0
SHARES
23
VIEWS
Share on FacebookShare on Twitter
Technical teams from Cambodia Airports have completed re-lamping the 3,300 metre runway at Sihanouk International Airport with LED lights.  This task included the airports’ recent 800 metre extension. All three of the nation’s international airports are now equipped with runway LED lighting, the last leg of what was a wider corporate plan to reduce electricity consumption, eliminate a substantial amount of electronic waste, and reduce its carbon footprint.

“This is a major step for all three international airports in reducing the rate of their electricity consumption, managing their carbon footprints to lower impacts and in decreasing the level  of their electronic waste by substantial amounts,” said Khek Norinda, communications and public relations director of Cambodia Airports.

“All light sources at the airports, including those used in the terminals, its offices and parking facilities, [have now] been switched over to LED technology,” he added.

Norinda also noted that the programme for upcoming airport upgrades has yet to be fine-tuned saying, “[With] LED technology, the direct electricity savings can vary from 20 to 25 percent and [LED bulbs have] a much longer lifespan, with lamps [lasting] up to 25 times longer than their regular halogen counterparts].”

He added that this benefit dramatically reduces electronic waste and induces savings in maintenance as well. As well as reducing power consumption, the use of LED contributes to cutting carbon emissions [which is helpful in] keeping up with green growth at the airports, according to Norinda.

In October, Cambodia’s three international airports achieved level 2 status on carbon reduction of the Airport Carbon Accreditation Programme (ACAP), which is the only voluntary global programme for greenhouse gas emissions reductions at airports.  It was launched in 2009 on the initiative of the Airports Council International (ACI).

The programme is independently administered and verified with four areas of certification: mapping, reduction, optimisation and neutrality.

The successful accreditation of ACAP level 2 status follows results showing successful reduction of scope 1 and 2 carbon dioxide (CO2) emissions at the three international airports and the subsequent introduction of a carbon management plan towards addressing these emissions.

The carbon footprint obtained for ACAP level 1 was used as a starting point for carbon emission control and the reduction of the airports’ environmental impact. Initiatives deployed to reach this goal included streamlining electricity use at the airports’ facilities, phasing out old vehicles and the sorting of waste.

This new level of certification is a recognition of Vinci Airports’ global environmental policy (known as Airpact), which established goals for their airports based on the company’s commitment to the preservation of the environment.

It also recognises the airports’ actions in managing and reducing their CO2 emissions and rewards a multi-annual effort to control and reduce their carbon footprint.

The next step will be to apply for level 3 of the ACAP programme, that being optimisation.  That will  require a widening of the scope of action in order to include the airports’ partners in carbon reduction endeavours, an ambitious but worthy goal.

This article was first published in Khmer Times. All contents and images are copyright to their respective owners and sources.
Tags: CambodiaCambodia Airportsreduce carbon impactSihanouk International Airport
Previous Post