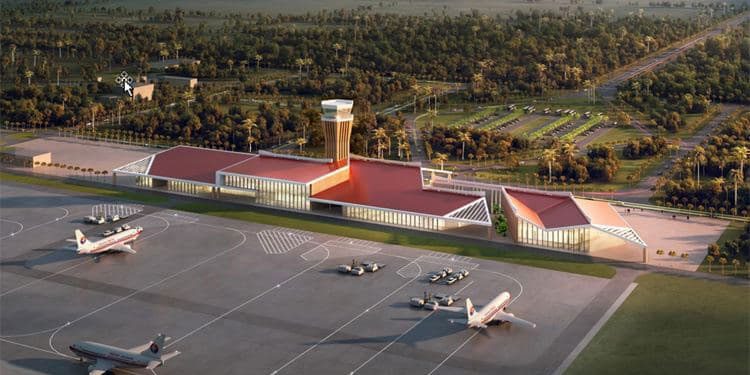 Sin Chanserivutha, spokesperson at the State Secretariat of Civil Aviation (SSCA) has confirmed that the main construction for the new Dara Sakor International Airport (DSY) in Koh Kong province has been completed and it should be operational by the end of this year.

The Dara Sakor project is being developed and will be managed by the Tianjin Union Development Group (UDG). The group secured a 99-year exclusive concession in 2008 for the new airport with a reported initial investment of $200 million. UDG’s plans also include the construction nearby of a Cambodia-Chinese Investment and Development Zone that will including a free trade area, shipping port and seaside resort according to the Centre for Aviation.

The Tianjin Union Development Group (UDG), formerly known as the Tianjin Wanlong Group was established in 1993 and is one of China’s largest overseas tourism real estate investment companies, according to their website.

The new airport is located in Koh Kong’s Botum Sakor district and covers 4.5 hectares of land near the Gulf of Thailand. It has a runway that is 3,200 meters long and 45 meters wide and will be able to handle long-haul aircraft, such as the Boeing 777 and the Airbus 340, as well as small and medium sized aircraft, including the Airbus 320. Once completed it will have the capacity to accommodate up to 10 million passengers annually.

The airport was originally slated to start operations by mid-2021 before pandemic-related delays were encountered. The SSCA is currently working through the airport accreditation process, a prerequisite for opening prior to a  fully operational target date of November 2021.

The new venture is expected to provide a huge boost to tourism in the region, which despite boasting immense natural beauty receives relatively few visitors in comparison to better known destinations, such as Sihanoukville and Siem Reap.

Chhay Sivlin, president of the Cambodian Association of Travel Agents (CATA) was reported as saying that the new airport had the potential to draw more international tourists to the region.

She added “Koh Kong has great potential for natural tourism and we have not yet taken advantage of the province’s potential,”

The new international airport is one of two that was planned for the province. A $40 million joint venture between Ly Yong Phat’s LYP Group and Bangkok Airways Pcl was intended to replace the current domestic Koh Kong Airport (KKZ).

That project was put on hiatus in February until the pandemic situation improves according to a statement from the SSCA.