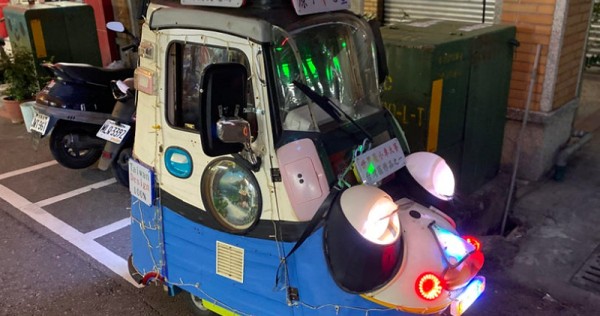 Aside from well-known tourist attractions such as Taipei 101, Taroko Gorge and Sun Moon Lake, many foreigners who come to Taiwan may often wish to see more local aspects of the island.

More often than not, they may even stumble upon a few eccentric creations made by Taiwanese people.

Recently, Reddit user u/-kerosene was one of the lucky few who discovered a local masterpiece in Taichung– a tiny car, complete with headlights that have eyelashes and a sign that indicated it was “100 per cent Taiwan Design”.

According to the social media user, he saw the car near Taichung train station and was seemingly mesmerized by its odd design and the many signs attached.

Of the numerous signs, one read, “Steinway Piano D-274”, while another read “eco-friendly bicycle for the day—Nantou MRT bureau.”

The front of the car also had a sign that indicated it was a participant of the “World’s smallest car race” competition and was “Taiwan Design 100 per cent”.

The post has since garnered significant views with social media users praising the car as “very kool” and asked others to imagine someone cruising down the street in it, blasting “Gongxi, Gongxi” on a cassette player to make it truly “Taiwanese”.

In fact, the vehicle is the brainchild of a local elderly man who is said to be very friendly and often drives around Taichung city in his customized car, according to a post published by travel blogger “Nini and Blue”.