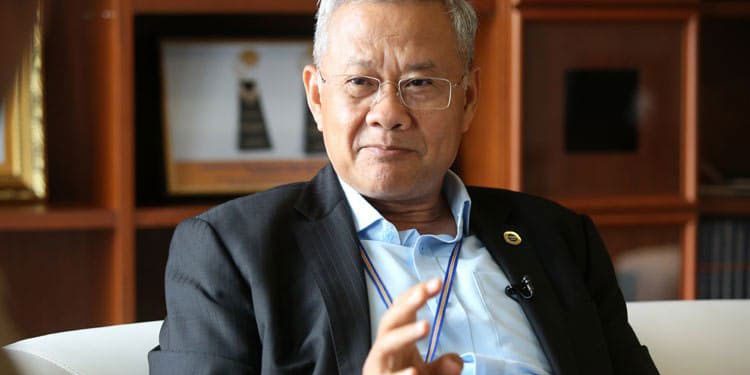 In Channy, the president of the Association of Banks in Cambodia (ABC) and president and  group managing director of ACLEDA Bank Plc, praised the efforts of the National Bank of Cambodia (NBC) and its monetary policy during the 42nd anniversary of its re-establishment.

Speaking about the NBC’s regulatory role during the pandemic, Channy said: “During the situation of the Covid-19 pandemic, the Royal Government of Cambodia (RGC) and the NBC executed wise leadership and guidance to sustain a sound financial sector, which underpins Cambodia’s emergence as one of the fastest growing economies in ASEAN and, indeed, the world. While the NBC tasked itself to boost confidence in the Khmer riel to help local business growth, banks and [other] financial Institutions (BFIs) need to operate by their internal governance to ensure stability of the industry and to sustain public confidence. Thanks to NBC’s leadership, the banking industry has grown despite the pandemic and stands in a strong position, which we can see today.”

When asked his view on the NBC’s handling of the Covid-19-related economic slowdown such as financial policies and moratoriums, he said: “As of late February 2021, the Covid-19 virus had started to spread inside Cambodia and had severely impacted all aspects of life in the Kingdom. The situation has been hard for many people, especially in the lockdown areas. Certainly, the Cambodian economy and the financial institutions and all our ABC members are not immune to those dramatic impacts. Banks and MFIs [microfinance institutions] together have restructured loans of circa $5 billion as of July 2021, which represents circa 15 percent of all credit in Cambodia´s financial sector. Though there was significant impact by the pandemic, Cambodia’s banking sector remains resilient and has presented marginal growth for the past five months. The growth is expected to reach around 15 to 16 percent by the end of the year.”

Speaking about whether the measures were adequate or not, he said: “Those measures do significantly support BFIs. In line with the RGC’s measures and intervention, the banking and finance sector is expected to experience healthy growth next year, both lending and deposit-taking, as the government is reopening businesses and economic activities. The RGC has made tremendous efforts and significant progress in the establishment of strong and healthy regulations for BFIs. This also created an attractive investment environment for the banking and financial sector. Consistent efforts and policy directions among related government agencies will be helpful and will encourage investors to undertake further investments in the Cambodian banking sector. Despite the impact of the prolonged Covid-19 pandemic, Cambodia’s banking industry has seen a growth in both loans and deposits in the first half of 2021. Outstanding loans rose by 19 percent year-on-year to $33.9 billion as of June 2021, while customers’ deposits increased by 20.8 percent to $32.7 billion, according to the mid-year report from the NBC dated 22 July 2021. Loans were provided to key sectors such as trading, housing, construction and manufacturing, among others. Non-performing loans are at a controllable rate of 2.4 percent during the 2021 January-June period.”

The only other suggestions Channy said maybe needed to be done differently would be a Prudential Regulations Credit Risk Grading & Loan Provision These regulations require minimum provisions of 1 percent for any facility, disregarding internationally accepted risk models and practices. The provisions are stricter on short-term loans than on long-term loans, which is contrary to commonly established risk-mitigation frameworks, in which the longer the loan maturity is, the higher the default risk is. Under current regulations, the duration of the loan portfolios in the bank and MFI industries are guided to be longer, thus the industry risk becomes higher, which he said is probably not the intention of the NBC as a regulator.