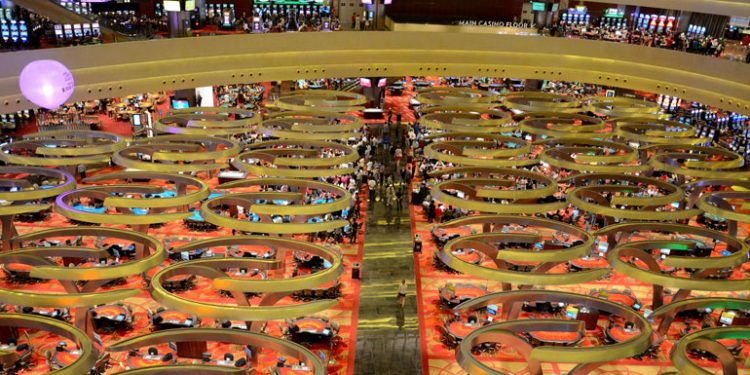 The National Assembly yesterday adopted the draft law on commercial gambling management to create more jobs and boost the economy.

National Assembly’s Commission on Economy, Finance, Banking and Audit chairman Cheam Yeap said at the meeting that the effort of the government to maintain political stability, promote security, and build the national economic infrastructure has seen a steady increase of national and international investments in the Kingdom, including in casinos.

“This law is aimed to ensure management of the integrated commercial gambling centres and commercial gambling to contribute towards boosting economic growth, promoting the tourism sector, creating more jobs, collecting revenue, and maintaining social safety and security,” he said.

The draft law comes while Cambodia is moving in the direction of democracy and the rule of law, as well as obtaining peace and political stability, which have created favourable conditions for the investment and business environment, Yeap said.

“In drafting this law, the Ministry of Economy and the Ministry of Interior studied in detail the experience and excellent practices of some developed countries in the region and beyond,” he said.

Minister of Economy and Finance Aun Pornmoniroth said at the meeting that this draft law will allow for strict and effective control over casinos and other commercial gaming sectors by setting a minimum investment capital amount for gambling businesses and by demarcating which commercial gambling areas are allowed or not allowed.

On the regional and global aspect, the government has seen that commercial gambling was turned into a tool of entertainment and tourist attraction around the world, he said.

“Tourism is increasingly under intense competitive pressure, which requires innovation in addition to the potential provided by natural attractions,” Pornmoniroth said.

“Thus, regulations on the commercial gambling sector are designed to enable the sector to operate under the umbrella of transparent law,” Pornmoniroth said.

Prime Minister Hun Sen said in a statement, obtained yesterday, that after the draft is signed into law by the King, effective implementation of this law will be strengthened with the management of the casino and commercial gambling sector, which will provide maximum benefits to the national economy and the people.

The government has allowed casino business since 1993.

The Council of Ministers said in a statement on July 3, when the draft law was adopted, that the investment in casino business has contributed to the development of border areas which were former battlefields, minefields, malaria zones, undeveloped and uninhabited areas, and the protection of the border belt through the construction of durable and long-lasting buildings which encouraged people to relocate.

“The casino business contributes to the development of tourism, creates jobs for the people and creates a source of revenue for the national budget,” it said.

Pornmoniroth said in the past, the government faced difficulties in attracting private investment in the sector in remote border areas without infrastructure, road, water, electricity, and people’s relocation.

“However, under the effort of the government and investor’s trust toward the government, some national and international investors started the casino investment in the Cambodian-Thai border Poipet area in 1999,” he said.

“In the face of the increasing investment, the government has pushed for the management of the gambling sector,” he added.

“We had already had a law to crack down on illegal gambling, but its enforcement almost completely failed. We are not interested in seeing other laws being adopted. We want effective action taken against illegal gambling first,” he said.

The draft law on commercial gambling contains 12 Chapters and 97 Articles.

King Norodom Sihamoni yesterday said in a statement on the occasion of the National Assembly session, that laws which have been passed by the National Assembly are a necessary path for the executive and the judiciary bodies to use for the supreme benefits in the carrying out of their duties and responsibilities effectively and efficiently in accordance with the actual situation and globalisation.

Today the National Assembly will discuss and adopt a draft law on state property management after it was postponed from yesterday.