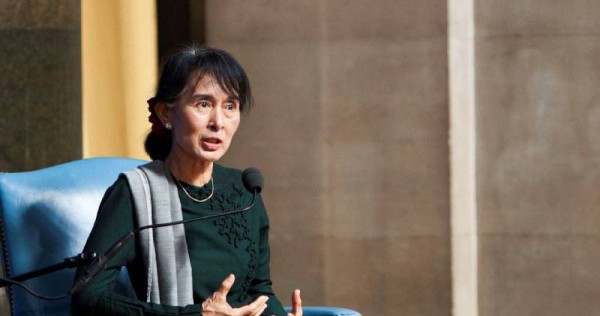 Nobel laureate Suu Kyi, 76, is on trial in nearly a dozen cases that carry combined maximum sentences of at least 150 years in prison. She has been already been sentenced to a total of six years detention for other cases.

Streets in some of Myanmar’s main cities were nearly deserted on Tuesday (Feb 1) as opponents of military rule held “silent strikes”, marking the first anniversary of a coup that led to deadly chaos and snuffed out tentative steps towards democracy.

The United States, Britain and Canada imposed new sanctions on the military and joined other countries in calling for a global halt in arms sales to Myanmar, a year after Nobel laureate Aung San Suu Kyi’s elected government was overthrown.

Since its bloody suppression of protests in the weeks following the coup, the military has faced armed resistance on multiple fronts in the countryside from groups allied with the ousted government .

On Tuesday, an explosion took place during a procession of military supporters in the eastern border town of Tachileik, two witnesses told Reuters. The blast killed two people, said one of the witnesses, and wounded more than 30 others.

State media on Tuesday said junta chief Min Aung Hlaing extended a state of emergency for a further six months to address threats from “internal and external saboteurs” and “terrorist attacks and destruction”.

Activists urged people to stay indoors and businesses to close in a silent show of defiance, despite warnings of arrests, jail and a seizure of businesses.

“We might be arrested and spend our life in jail if we’re lucky. We might be tortured and killed if we’re unlucky,” said youth activist Nan Lin.

A military spokesman did not respond to telephone calls seeking comment on Tuesday.

Images on social media showed quiet streets in various cities including Mandalay, Magway, Myitkyina and Yangon, where pictures on a page put up by strike organisers later showed a small protest at which people threw red paint on the ground.

A man set himself on fire in the central town of Kyaukdataung and was in a serious condition in hospital, according to a resident and to local news outlets, which said the man was protesting at intermittent power supplies.

“He set fire to himself at the Main Street in front of the electricity office,” a resident told Reuters by phone. “He is in a serious condition. The situation is quite unstable here today.”

There were also pro-junta events in several locations, including the capital, Naypyitaw, where thousands attended a rally, some dancing and holding aloft photographs of Min Aung Hlaing, with banners wishing him good health.

The was no claim of responsibility for the explosion in Tachileik and a local militia group did not immediately respond to a request for comment. The town’s news agency said a soldier was among the two killed, and veterans among the wounded.

“We all heard an explosion and people ran randomly, shouting loudly,” a witness told Reuters by phone. “I hid inside the house.”

Such violence has become commonplace in Myanmar in the year since Suu Kyi and other ruling party members were arrested as they prepared to take their seats in parliament, after winning a 2020 election the generals accused them of rigging.

The coup triggered a huge backlash, with strikes and protests that led to about 1,500 civilians being killed in crackdowns and more than 11,787 unlawfully held, according to United Nations human rights office figures on Tuesday.

A junta spokesman did not respond to calls seeking comment on the UN figures. It has previously disputed similar numbers from human rights groups.

The UN human rights expert on Myanmar, Tom Andrews, on Tuesday said the junta was functioning like a criminal enterprise, harming its people and stealing their resources.

“The international community must take strong, meaningful steps to cut the junta’s access to weapons, funds and legitimacy,” Andrews said.

The military has accused the UN of bias and interference and is refusing to bow to international pressure, despite a corporate retreat from Myanmar and sanctions.

The military ruled for decades after a 1962 coup but had begun to withdraw from politics in 2010, freeing Suu Kyi after years of house arrest.

Her party formed a government after a 2015 election, but was required to share power with the army until the military abruptly ended the experiment with reform a year ago.

Life has become a grind for many since then with the economy withering, regular power cuts and internet curbs.

Suu Kyi, 76, is on trial in more than a dozen cases that carry a combined maximum sentence of more than 150 years in prison.

“It’s very lamentable, until this time there has not been significant progress,” Indonesia’s foreign ministry said.

Singapore said conditions for the Myanmar people continued to deteriorate and called for progress and Suu Kyi’s release.