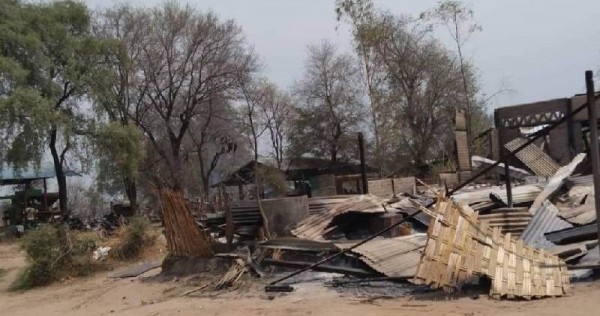 As international attention shifts to the Russia-Ukraine war, the Myanmar military’s campaign of attacks against its opponents has ramped up a gear, with villages in the northwest being razed to the ground amid a bid to quell anti-junta forces.

In March, soldiers destroyed more than 1,000 homes across four villages in Khin Oo Township in the Sagaing Division, where local militant groups have waged a fierce resistance effort. The military’s series of “hit-and-run” arson attacks, known by locals as “Operation Shadow”, has killed at least three civilians and 15 members of the People Defense Forces (PDFs), aid workers say.

Days after the strikes, junta leader Senior General Min Aung Hlaing in a televised speech said his regime would be toughening its crackdown on dissident forces. Speaking at an Armed Forces Day ceremony in Naypyidaw attended by thousands of military personnel on March 27, he threatened to “annihilate” coup opponents and warned the army would not negotiate with “terrorist groups and their supporters”.

Since the military seized power in a coup 13 months ago, junta forces have set fire to more than 6,000 civilian homes, largely in areas where anti-regime resistance is fiercest.

According to independent research group Data for Myanmar, the Sagaing Division has suffered about 60 per cent of the damages from among 165 locations across the country since Feb 1 last year.

In one of the attacks on Sunday, some 80 armed soldiers launched an early-morning operation in Nga Tin Gyi village in Khin Oo township and set heavy artillery shells on fire. The fighting left about 250 homes destroyed and forced tens of thousands of residents to flee.

Some of those who did not flee were detained and questioned about whether they knew the whereabouts of local fighters.

Elderly family members of the individuals who were initially questioned were also later detained, and according to at least one eye witness, were “tied up and beaten” by soldiers.

Locals say the soldiers were from the 77th Infantry Division stationed in the Yay Oo township.

A 40-year-old villager on Monday told media outlet Myanmar Now that residents believed they were targeted because the military had been tipped off. “The soldiers used petrol pipes, shoes and tires to set fire and burned the houses all day until 4am the next morning, before leaving,” the villager said.

A 30-year-old resident of Khin Oo, who chose to stay in Nga Tin Gyi village after the attack, told This Week in Asia on Tuesday that residents were struggling to receive aid due to a communications blackout launched by the junta to weaken local forces.

Sagaing is among the many regions cut off, with connectivity available in only a few cities left, including Kale, Monywa and Shwebo. Many townships began being disconnected last month.

“They started raiding our villages after the internet was blocked on March 5 this year,” the Khin Oo resident said. “They came, fired guns to scare villagers, then burned our houses when everyone fled the village. Some elderly residents who couldn’t leave were abducted and questioned.”

The villager added: “Food and medicines are needed here every day. We don’t have any budget now since the internet was cut off. Victims are now taking shelter at leftover houses and schools.

A spokesperson from Kani People’s Defense Force on Monday told This Week in Asia that internet access had been blocked in Kani Township since September last year, and that cell reception was usually only available from noon to 5 pm, if at all. “Since the internet was cut off, the military launched a series of raids on villages and set fire to them, as well as increased military training for the armed Pyu Saw Htee militia.”

One fighter from the Sagaing Region Defense Force claimed the blackout had not only weakened the links between the revolutionary forces, but allowed the junta to cover up its human rights abuses and also prevented forces from receiving funding domestically and abroad.

“Some of us are starting to have financial problems” due to the military’s strategy of cutting off information, money, food and recruitment, the fighter said.

In 2019, when fighting between the military and the Arakan Army (AA) intensified, townships in northern Rakhine State were cut off for more than a year.

In addition to the Sagaing Division, dozens of townships in Kachin State, Mandalay Division, Magway Division Chin, and Kayah states have also been disconnected, and telephone lines have been cut in some townships in Kayah State, where fighting with the military has intensified.

Kayah State, the closest state to capital Naypyidaw where top coup leaders are based, has been under blackout since mid-February, and the military council has launched a major offensive.

Last month, National Defense Force (NUG) Defence Minister Ye Mon told the media that within six months of the declaration of the people’s resistance, the PDFs had inflicted heavy casualties on the military council and had taken control of many rural areas.

“If the last six months of the people’s resistance were to be considered as the first stage of the revolution, at this stage the PDF has accomplished guerilla warfares very well,” he said.

“They have been able to carry out effective war operations. They were able to destroy the enemy force on a daily basis. Now our PDFs have taken control of many rural areas.”

While the international community has entrusted Asean with dealing with Myanmar, the bloc has struggled to make progress on getting the junta to carry out a peace plan. India and China, two of Myanmar’s biggest neighbours, have also failed to make inroads in influencing the military to stop its campaign of violence.