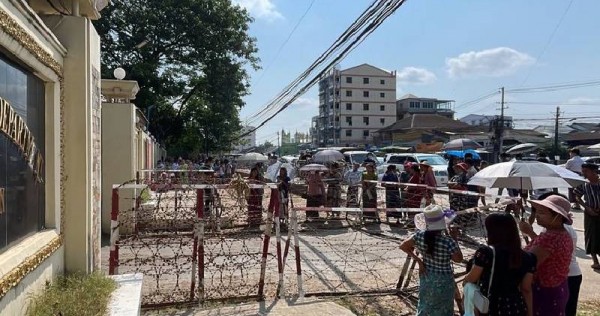 Relatives of hundreds of prisoners gathered outside Myanmar’s Insein Prison on Sunday (April 17) after the military government announced the release of 1,600 prisoners in an amnesty to mark the Southeast Asian nation’s new year.

The number of prisoners released in the annual amnesty was a fraction of last year’s 23,000. It was unclear whether it would include jailed members of the civilian government overthrown in a Feb 1, 2021 coup.

A local reporter on the scene told Reuters that no political protesters had been released so far from Insein.

Lieutenant General Aung Lin Dwe, a state secretary of the junta, signed a statement announcing “1,619 prisoners, including 42 detained foreigners, will be released under the Amnesty as part of the celebration of Myanmar’s new year, to bring joy for the people and address humanitarian concerns.”

The military has arrested at least 13,282 people and killed 1,756 opponents since the coup, according to the Assistance Association of Political Prisoners (AAPP) activist group.

Among those detained are the ousted government’s leader, Nobel laureate Aung San Suu Kyi, being held in the capital Naypyidaw, and her Australian economic adviser, Sean Turnell, who is in the Insein facility on the outskirts of Yangon.

“The junta uses the political prisoners as hostages,” an AAPP spokesman told Reuters on Sunday. A spokesman for the junta, which has disputed AAPP’s figures, did not respond to a request for comment.

Standing near plainclothes police on Sunday, nervous-looking families held placards with names of their loved ones, said the local reporter, who asked not to be named for security reasons.

The mother of a 22-year-old protester arrested eight months ago told the reporter she was waiting outside Insein after her son wrote saying he might be released in an April amnesty.

Another mother, whose police officer son was arrested in June for participating in the Civil Disobedience Movement against the junta, said she had waited outside the prison several times during previous amnesty periods.

“I have a feeling he will be freed today,” she added, asking not to be named for fear of retaliation, the reporter said.