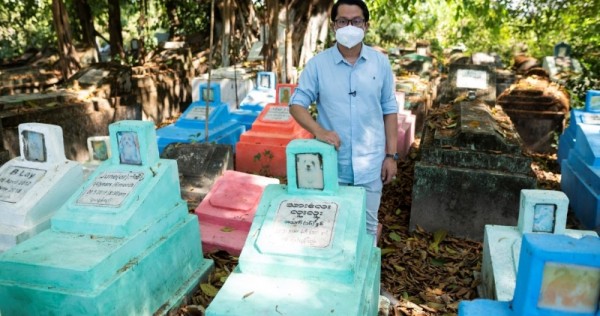 YANGON – In a shady corner of a cemetery in Myanmar’s commercial capital of Yangon, pastel-colored headstones mark the final resting places of dozens of beloved pets: “Treasure”, “Blacky”, “Princess”, “Bark A Lotzzi”.

Local doctor Tin Htun Naing said he created the burial ground, the country’s largest and best known, in 2015 when his dog, Little Daughter, died after 15 years of loyal companionship and he couldn’t find a place to inter her.

While pet ownership is on the rise, few people in densely populated Yangon have gardens. When pets die, many have little choice but to dump their bodies in landfills or rivers, or find a plot of unused farmland.

“I couldn’t dump her in the wild when she died because I took care of her as my own child,” Tin Htun Naing said.

He went to a local cemetery and asked a gravedigger to bury her there, later helping other grieving owners to do the same.

Now, some 300 pets are buried there, mostly dogs – including a celebrity police sniffer dog named Sergeant Michael – but some cats and one rabbit.

Each burial, handled by a local family who takes care of the graveyard, costs about $70.

Pet cemeteries have long existed in the West and have proliferated around the world in recent years, including in other parts of Southeast Asia.

But Tin Htun Naing says Yangon residents could soon have to find an alternative. Municipal authorities have ordered burials to stop after complaints about the interment of animals close to human graves.

“I have no intention to disrespect the people who died and were buried here,” he said. “I just created some space to bury pet animals as I think they should have their proper graves too.”

Aung Myint Maw, director of environmental conservation at the Yangon City Development Committee, said there were no legal guidelines covering the disposal of animals in Myanmar but pet cemeteries could be established if there was public demand.

Sein Wa Ti, a pug fanatic who has a large posse of the dogs at her home, said she hoped the site could remain open.

“On behalf of pet lovers, I want to ask the government to recognise this pet cemetery,” she said.