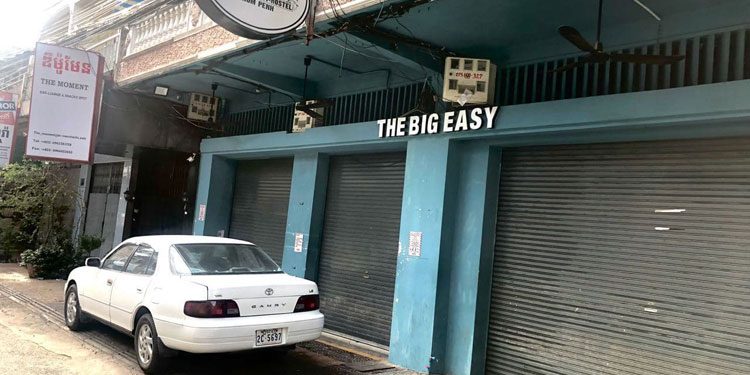 It was a quiet weekend on Phnom Penh’s Street 172 (Ly Yoat Lay St), normally a Mecca for tourists, expats and locals alike. The shutters were down at hostels, restaurants and bars, including expat favourite, The Big Easy. with its frontage serving solely as a parking space for a lone, white Toyota Camry. Along the road a couple of expats sat smoking dejectedly outside a shuttered café.

Even the shops serving the street’s patrons are struggling. The owner of Navy Shop, an Aladdin’s den of drinks and smokables, stuck her head through a gap in the security grill and gave me a sad smile.

Street 172 is one of the scores of entertainment strips across the country that had already been struggling with lower footfall and fewer covers as Coronavirus fears kept people at home. Now they have been told to shut shop for two weeks. Restaurants can still offer take away food, but for some the cost and trouble of getting staff in with a 9pm to 3am curfew, along with utilities fees and the risk of buying-in stock that doesn’t sell have made them decide to shut their doors. Some may never reopen.

One restaurateur on 172 told Khmer Times his venue has faced pressure to close even when roped off and only offering take away and delivery. “It seems like Covid restrictions [are] as an excuse to close all businesses on the street. I’m not sure why, but I can’t understand [why] they ask us to close when it’s clearly delivery only,” he said.

The situation was the same on Street 308, in Phnom Penh’s Bassac district where Red Bar and Phnom Penh Yacht Club were among the venues to close their doors until August 12. Some restaurants with outside seating have been able to stay open by observing the Rule of Ten, a maximum of ten customers at any time. Poolside Villa was doing a brisk trade in coconuts at $1.50 a pop and still offering meals at its outdoor tables.

The Cambodia Restaurant Association held talks with government officials on Thursday night, seeking clarity on the regulations and looking for ways to help members keep their businesses running and pay staff.

CRA President Arnaud Darc told Khmer Times the association was not consulted about the measures and Wednesday’s announcement was “totally unexpected”.

“Since the beginning of the pandemic the CRA has supported government efforts to curb the spread of the virus,” he said. “We have explained to our members and made sure we collectively implemented safety measures condensed in the Prime minister’s ‘three dos and three don’ts’.  As actors in Cambodian civil society, we feel responsible to do our part in the fight against the virus alongside the government and local authorities no matter when the measures are announced. The virus does not wait to spread.”

The CRA says 40 percent of restaurants have closed and those that have remained open have lost 25 to 30 percent of their workforce.

“With these new measures more will close,” said Darc. “We are at a critical path. We can talk also of a ‘life and death’ moment for our entire industry. The last 16 months have been very challenging and this last straw could be fatal to many years of development if no support is provided.”.

Darc said the association plans to help its members by giving them a unified voice to communicate their concerns to the government and make recommendations for steps the authorities can take to help the industry and limit the impact on the overall economy.

“We are publicly crying out for financial support for the industry to maintain whatever is left,” he said.