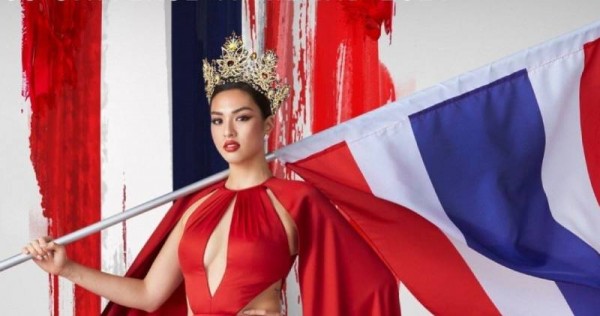 A Thai-Australian model who wowed her way to this year’s Miss Universe Thailand title with an empowering message of “#realsizebeauty” has cast a spotlight on changing standards in a country where a smaller frame has long been seen as the ideal for women.

Anchilee Scott-Kemmis impressed the beauty pageant judges early on with her video presentation for the selection round, which saw the 22-year-old open up about past rejections she had experienced as a model in Thailand because of her size.

“I had never heard any contender admit that she had been rejected due to her size before, except Anchilee,” said Thitipong Duangkong, an academic and expert on women studies, and one of the judges for the Miss Universe Thailand competition.

“Thai society has had this crisis about beauty standards for so long. Many female judges identified with Anchilee’s story and how she was told, since starting as a teen model in Thailand, that although she was beautiful, she was too big.”

At 1.83m tall, Scott-Kemmis is a reflection of how Thailand “has grown to appreciate more athleticism in a female body”, Thitipong said, comparing her height and that of Maria Poonlertlarp, who won Miss Universe Thailand in 2017 and is also 1.83m tall, with Apasra Hongsakula, who in 1965 became the first woman from Thailand or Southeast Asia to win the Miss Universe title at 1.63m in height.

“It also reflects feminism and the right to one’s own body. Anchilee has used her body, which is not a Thai standard, to create this message,” Thitipong said.

Scott-Kemmis has said she thinks that “fashion is slowly changing because people want to see models who are more human”, and in an interview with Thai online news magazine The Momentum said “a new kind of consciousness” needed to be adopted by society “because nobody wants to live this way”.

“Those who have never received criticism about their body don’t understand,” she said.

“Real size beauty is about realising everybody’s value and to respect everyone around us who is considered big, small, tall or short.”

On Tuesday (Nov 23), Scott-Kemmis flew to Israel to take part in the 70th Miss Universe pageant and, with the backing of countless Thais who were inspired by her #realsizebeauty message, compete against beauty queens from more than 70 nations for the international crown.

Fashion designer and modelling agency founder Milin Yuvacharuskul, who led the creative team behind Scott-Kemmis’ Miss Universe Thailand success, said her body positivity agenda was already there from the start.

“There is a lack of representation for the body positivity message in Thailand,” Yuvacharuskul said. “We want the beauty standards to change. We want a beauty pageant to be something that relates to people of all genders and ages.

“We also want a new generation to have a role model that regardless of your body type, you can be successful. This can reduce social bullying too.”

Somruthai said she was “proud of Anchilee”, contrasting her “really athletic” look with what was often considered “acceptable” in terms of Thai beauty standards: “Small-size legs and arms and white skin tone”.

“I have a friend who is 170cm and weighs 50kg and she is still considered plump. Another is 160cm and has added on some muscles in the gym lately, she was told by some friends that ‘You looked better before’,” she said.

A change in the way women are portrayed in the country’s media could help, Somruthai said, as “bigger actors in Thai soap operas usually take up roles of servants, or comedic roles or as extras” and “no actors in the leading roles ever are big”.

A few of the country’s fashion brands have embraced curvy clothing lines, she said, while predicting that a complete change in attitudes will take time.

“It could start with how you see yourself. If you are healthy and strong, it doesn’t matter how anybody sees you,” she said.