Massive entertainment centre in Cambodia under construction despite Virus 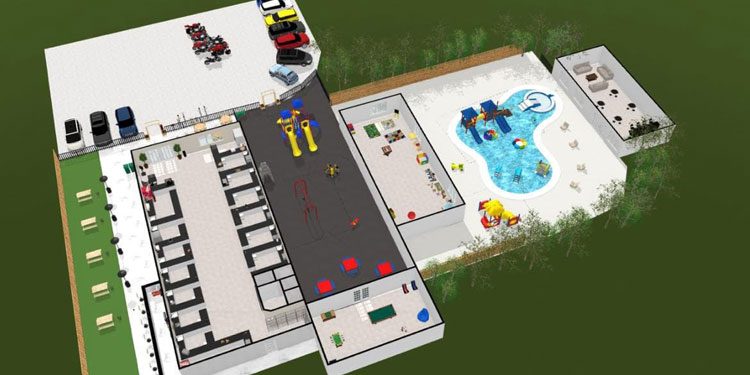 An English entrepreneur is defying the Covid-19 odds by building Kampot and Kep’s first entertainment centre that will house a multitude of businesses including a skatepark, an outdoor pool, an adventure playground and 17 restaurants.

With so much negativity nowadays with the Covid-19 situation closing businesses in the Kingdom with no signs of slowing, there is a breath of fresh positivity in the 5,500 square metre project being undertaken by Chris Alexander, owner of Lux Realty and Development Company.

The completed project will mainly be aimed at local and Western families as a space where adults can relax and unwind after a stressful day at work or at the weekend to socialise with other families while their children play on the many child-friendly activities the centre will contain.

Alexander told Khmer Times yesterday: “The reason I started the entertainment centre project was not just an idea to profit from the food and beverage industry but to create a community for the people in the area who are still trying to run businesses and support their families.

“In Kampot there are a lot of local families who would love to enjoy going out and doing activities together but most involve spending a whole day or weekend out or using a lot of cash, which at this time is hard to come by.

“With that in mind, we took a look at all of the f&b (food and beverage) businesses in both Kampot and Phnom Penh and the one common factor that plagued most businesses was rent. There are enough people in Cambodia for businesses to survive if rent wasn’t so high.

“Before the pandemic, my last venture [a restaurant in Sihanoukville] was taking $5,000 a day whereas my rent was $8,000 a month, meaning there were no worries in paying. After the pandemic struck, the landlords didn’t care and wouldn’t drop rents or work on a joint venture. If they did there would still be 10 successful businesses running there [in Sihanoukville] today supporting 50 local families instead of [it being] an empty ghost town.

“I launched Lux Realty in February and once it reached a level of standard I was happy with, I decided to talk to restaurant owners in Kampot about their problems and offered my help in the way of restaurant space at the entertainment centre. To my amazement we have already signed up 17 restaurants, one bar, an arcade for adolescents, a children’s adventure playground, a swimming pool with a club house and a games room for adults with pool and table tennis, with plans for a skate park in motion.”

Connor File, a soon-to-be resident restaurateur at the centre, who owns Smashed Burger Co and Three Little Pigs Cafe already in Kampot, said yesterday: “I was incredibly excited to be invited to open not just one, but several stalls at the food court. Being a trained chef I am very passionate about this project as it brings higher quality food to the Kampot and Kep area.

This comes as Kep province signed an agreement on Aug 3 to build a multi-purpose port that will boost the economy and development in the area.

Kep Governor Som Piseth said the port project will bring a new focus on tourism development in Kep and will connect to a new beach extension project in the two communes of Prey Thom and O’Krosar.

Cambodia may ease Covid restrictions ahead of reopening