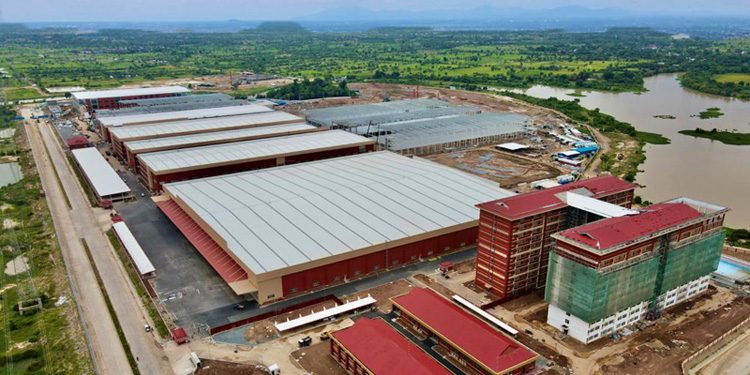 Marvel Garment is the largest vertically integrated knitwear manufacturer in China and has been constructing new production facilities in PPSP since March of 2019.

A total of 3,000 workers have been taken on since early October in 2020 and there remains an urgent need to recruit up to 6,000 more workers by the end of February 2021. The company is currently speeding up its preparation of the workers’ dormitory and support facilities to accommodate the more than 10,000 workers planned for hire by 2021.

The new lease agreement for 3.7 hectares of land is symbolic of the cooperation between the two companies in the creation of employment and the promotion of industry in the Kingdom.

Last December, PPSP subsidiary Sahas Properties Co Ltd broke ground on a new rental warehouse inside the zone, alongside National Road 4. That development, costing around $1 million, was commissioned after the subsidiary’s first four-unit rental factory building was built and partially leased out this year.

Shareholders of the Cambodia Securities Exchange-listed PPSP confirmed there will be no dividend distribution for the year 2019 and also approved a share buyback in late October.

During an extraordinary general shareholders’ meeting it was revealed the total number of PPSP’s shareholders is 834 with total shares of 71,875,000. Forty-five shareholders holding 57,274,248 shares had attended the meeting.