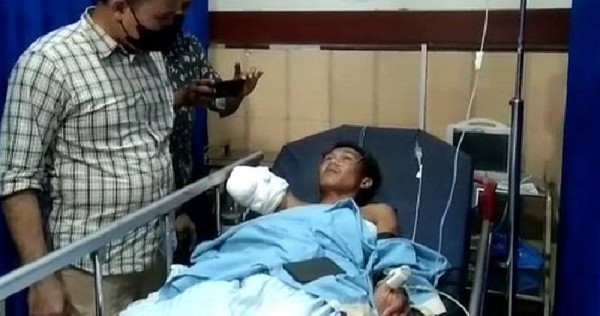 When you’re at the zoo, you’re probably looking out to see the exotic animals.

However, one should pay even more attention to the surroundings and signage.

Ilham, a tour guide in Indonesia, was driving tourists through Sinka Zoo in West Kalimantan on Thursday (June 9) afternoon when he stopped to change the car’s tire as it had a puncture.

The 49-year-old then jumped over a fence to wash his dirty hands at a pond, not knowing it houses one of the zoo’s crocodiles, reported Detik News, an Indonesian online news platform.

“When the victim was at the edge of the pool and washing his hands, suddenly a crocodile appeared on the surface, which immediately grabbed the victim’s right hand by biting it,” said one of the witnesses, according to Detik News.

Witnesses said that his hand was severed while pulling away from the crocodile, reported Coconuts Jakarta.

Illham was then rushed to the Abdul Aziz Hospital Singkawang hospital.

Local resident Yanto told Indonesia’s Kompas News that the management should put up a danger sign in the vicinity if there are wild animals or something that could threaten the safety of residents or visitors.

Yanto also said: “We hope that similar things will not happen again in the future.”

In 2017, a young entrepreneur in Karnataka, India has his left arm bitten off by a crocodile in the Thattekere Lake.

He was visiting a temple in ​​the Ramanagaram district and followed his dogs into the water when the incident happened. A trespassing case was later filed against him by the forest officials.

Lesson learnt, never go near pools of water without double-checking for dangerous reptiles.