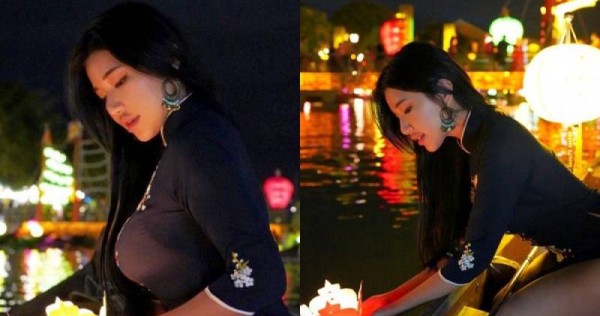 However, this time she may have taken things a step too far by choosing to wear an ao dai (traditional Vietnamese outfit for women) without the typical long flowing pants, posting the photos on Facebook on April 4.

In the photos, she was seen releasing lanterns onto the Hoai River in Hoi An, reported Vietnamese newspaper VnExpress International.

Siew had reportedly flew to Da Nang from Singapore a week before that, and stayed at a resort in Hoi An.

The post quickly went viral for the wrong reasons, incurring the wrath of Vietnamese netizens who had plenty to say about her faux pas, with one decrying it as “absolutely disgraceful” and others accusing her of defiling their culture.

After the severe backlash, Siew issued an apology on Facebook directed at her Vietnamese audience on Wednesday (April 6).

“There was a posting of mine that truly upset the people [of Vietnam],” the Instagram model wrote. “I deeply and sincerely apologise for my actions/content and the disrespect to the traditional culture of Vietnam.”

Siew, 23, is famed for her racy content on her multiple social media accounts, including the controversial OnlyFans online platform.

She currently has an impressive 17.4 million followers on Instagram (picture below), 685,000 Facebook followers, and 1.2 million TikTok followers.

Some Vietnamese fans of Siew, however were more forgiving, responding to her comments on Facebook with humour.

One Facebook user posted: “When you come to Vietnam again, please visit [an ao dai] shop. The shop will sponsor an ao dai for you (shirt and pants included) too!”

While Siew seems to have been let off with a light slap on her wrist this time, the appropriation of culture in commercial or artistic use has always been a sensitive topic.

In 2019, US country singer Kacey Musgraves was criticised for cultural appropriation when she performed on stage in an ao dai without the pants too.

And in February this year, China was also accused of cultural appropriation after using a Korean traditional costume in the Olympic opening ceremony in Beijing.