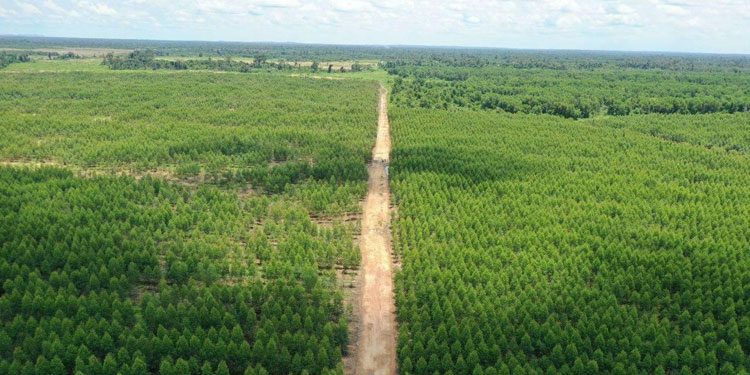 The Ministry of Agriculture, Forestry and Fisheries (MAFF) has claimed that it is revising the economic land concession (ELC) laws to ensure that the land is being used properly to benefit the country’s economy.

Minister Veng Sakhon told Khmer Times that since the government suspended the issuance of ELC’s in 2012, the ministry has cancelled more than 100 concessions throughout the country, some of which could have secured purely for speculation.

Prime Minister Hun Sen issued ​the directive to suspend the issuing​of  ELC licenses for private companies​ on May 7, 2012.

“Now we are revising the use of ELC’s and our team is working on the issue to evaluate the companies’ implementation of the masterplan which is an integral part of the ELC contract,” he said.

“So far, we have observed that some companies could not profit from industrial or large scale farming ventures such as an oil palm cultivation company in Mondulkiri, which has invested about $200 million and a sugarcane plantation in Preah Vihear, where cultivation has been suspended as the company could not make it profiable.”

Sakhon said that the government has granted ELC’s to 229 companies involving more than 1,178,641 hectares to be converted into large scale agro industries in the country and create employment. He said 515,701 hectares have been cleared and 438,250 hectares are being cultivated.

He said only about 45 percent of the  companies are cultivating on the land while the rest  claimed that they are revising their investment plans to either change the primary crops as approved in the development masterplan or change the use all together.

“Some companies did not conduct detailed feasibility studies about the kind of crops which could be planted and no soil investigations or studies were done to determine the suitability of the soil to see whether it could support the cultivation of agro industry crops such as rubber or oil palm. As a result, the companies left the land unused and we will not hesitate to revoke them if they kept the land free. We are working on this now,” he said.

He said people will benefit from the employment created and this is the main purpose to boost economic growth as the government also can collect tax revenue from ELCs which have been or are being developed as there is a tax element per hectare on developed land which earns revenue.

MAFF, has earlier has urged Chinese-owned Lim Royal Joint Stock Co Ltd, which was granted an ELC to develop an agricultural industry in Mondulkiri, to speed up its investment after the company changed its development plans.

The government transferred all agricultural ELC’s to be under the control of the Ministry of Agriculture in 2016. Prior to this, ELC’s were also issued by the Ministry of Environment and at times, even the Ministry of Water Resource was involved as some land plots were under its control.

The government charges just $5 per hectare a year for ELC after the land has been cleared and cultivated.As such, of the 1,178,641 hectares, the government could collect about $6 million a year.

However the minister said there are still companies which have failed to properly pay their tax dues even though they are cultivating on the land. He said the government collected just more than $1 million a year from ELC’s.

The government in 2016 warned Mong Reththy Group (MRT), an investor in agro-industrial crops such as oil palm and cassava of not paying all outstanding back taxes on its economic land concession in Sihanoukville’s Prey Nop district.

Sakhon said that the government’s strategy is to continue to reform land management in order to ensure proper allocation and the use of land.

Chan Sophal, director of the Centre for Policy Studies (CPS) said that according to the report by MAFF, not all the ELC has been developed as planned as the conflicts between the ELC holders and local people have happened

He said for some concessionaires, the land size may be too large and social conflicts too problematic.

“I think the government should pilot a long-term land lease for small and medium sized farmers for land that is available and productive for agriculture,” he said.

The Centre has conducted a feasibility study and formed a viewpoint that land allocation for small and medium farms in the concessional or rental model could be feasible and more beneficial for both higher output and broader distribution of benefits from the land, he said.

The  “State of Land in the Mekong Region”, which was  launched in 2019 has seen academics urging the government to reform economic land concession procedures and provide additional support to villagers in need of land for farming.

Some companies that are granted ELC’s have been accused of deforestation and logging on the land concession and the minister said this happened previously.

He said the government has suspended new ELC’s although there are reports of this still being carried out on the quiet, as the government needed to reserve land for smallholders for farming and some cancelled ELC’s currently have been granted to people as social land concessions, a workable model as long as the farmers on these concessions do not have the right to sell or mortgage them.