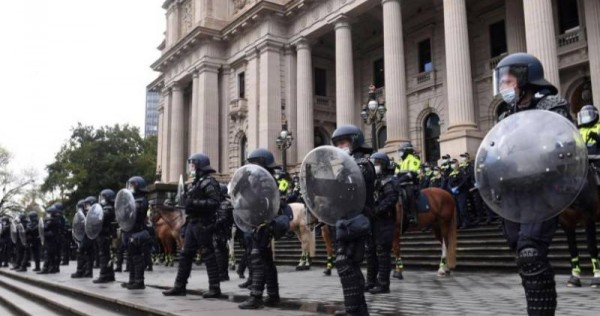 SYDNEY – Australia’s Victoria State on Wednesday (Sept 22) reported a jump in new Covid-19 infections as Melbourne, the state capital, braced for a third straight day of protests against tough restrictions.

“The ugly scenes that we saw yesterday are not only appalling, they’re unlawful,” Victoria Premier Daniel Andrews said at a media briefing in Melbourne.

Sydney in New South Wales State and Melbourne, Australia’s largest cities, as well as the capital Canberra have been in lockdown for weeks to contain a Delta variant outbreak.

Officials want more people to get vaccinated before easing curbs. Melbourne was in its sixth lockdown, the most of any Australian city during the pandemic.

State Police Chief Commissioner Shane Patton warned protesters to stay away from Melbourne, where he plans to deploy more police officers on Wednesday.

“You’re not going to be welcomed with open arms, I can assure you of that … These protests can’t be allowed to occur again,” Patton said.

Authorities are aiming for a staggered reopening in Sydney and Melbourne, easing some curbs when the adult population reaches 70 per cent fully vaccinated, expected next month. More restrictions will be relaxed when the figure hits 80 per cent.

Officials cancelled a traditional New Year’s Eve firework display in Sydney at 9pm for the second year. But midnight fireworks will go ahead, a city spokesperson said. The city does not want the two audiences to mix.

The rates of people age 16 and older who are fully vaccinated were 54 per cent in New South Wales and 45 per cent in Victoria.