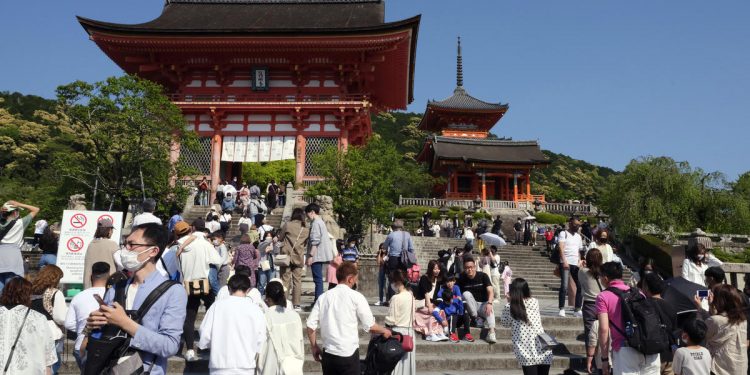 Tokyo — The glorious ancient monuments, Zen temples and soaring pagodas of Kyoto have made it a major tourist draw for decades. The Japanese city’s population is only about 1.5 million, yet it boasts 17 individual UNESCO World Heritage Sites. But the bucolic scenery belies a painful reality: Japan’s magnificent imperial capital city is running on empty.

Kyoto Mayor Daisaku Kadokawa minced no words at a shocking news conference last year: “We’re facing a crisis situation, with the prospect of bankruptcy within a decade.” Without steep cuts in public services, it was forecast that the city will fall $2 billion into debt, with all reserve funds exhausted, within just five years. Japan’s continuing ban on tourists amid the coronavirus pandemic has hit Kyoto especially hard. The city drew a whopping 88 million visitors in 2019 alone, but tourism has now dwindled to a trickle of mostly-domestic visitors. Japan’s overall inbound tourism plunged to about 250,000 people last year, the lowest since record-keeping began in 1964.

But pandemic-related expenses and the collapse of tourism have merely exposed decades of fiscal mismanagement in the city. The red ink started flowing 30 years ago, when Kyoto built a second subway line at a cost that eventually ballooned to $4 billion. The Tozai line has never managed to meet its daily passenger targets.

Officials also invested $120 million in a lavish upgrade and refurbishment of City Hall, complete with stained glass windows, European-style damask-covered walls, a Japanese teahouse, a roof garden, and even an underground corridor linking it to the white-elephant subway. Residents snidely note that the corridor is barely used. So, last fall, the axe finally dropped. The city government slashed transit subsidies for senior citizens, raised day-care fees and cut salaries for civil servants — despite concern that the austerity measures would hasten an already-alarming exodus of residents from Kyoto.

City Hall received 9,000 comments on the budget cuts, with widespread opposition to the belt-tightening, according to a segment last fall on the Asahi Broadcasting network. Some residents demanded that the city cut the salaries of municipal assembly members — or the number of politicians, period.

Even the city’s zoo has been reduced to seeking handouts. Food manufacturers and gardening companies donate everything from radishes, frozen melons and cucumbers to tree clippings. It has all helped the zoo slice its food budget by about 10%, its vice director, Seitaro Wada, told local Kansai TV last fall. Japan is now moving ever so tentatively to reopen its borders. A few dozen tourists are set to be allowed in on a test basis over the coming weeks. But the old imperial capital’s budget woes are so baked in that Hiroyuki Mori, an expert in local public finance at Ritsumeikan University, told YTV News that “even an increase in tourists would not offset the red ink.”

“The core of municipal revenue is local and property taxes,” he said, noting that on both counts, Kyoto comes up short. In part because of its numerous universities and 150,000-strong student population, only 43% of residents pay local tax. To preserve Kyoto’s unique traditional landscape, high-rise office towers and condominiums — normally a lucrative source of property tax in Japan — are banned.

The city is also blanketed with a remarkable 2,000 Buddhist temples and Shinto shrines, all of which have militantly fended off any attempts at even modifying their tax-exempt status. Barring divine intervention, the first round of cuts may not be enough to save Kyoto from bankruptcy, and having its finances taken over by the national government.