Knock it down: Tourists in Bali punished with push-ups when caught not wearing masks 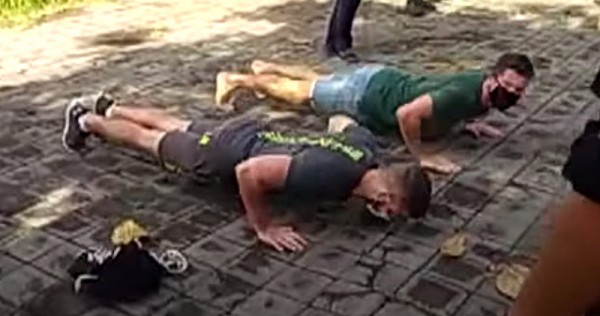 Bali has been a hot topic on social media lately, no thanks to rule-breaking foreigners.

In these trying times, a face mask is pretty much mandatory when you leave the comfort of your home and it is no different in Bali. The fine for not wearing a face mask in Indonesia is IDR100,000 (S$9.45).

Or like some foreigners are discovering, doing push-ups in front of masked security officers.

According to AFP, the push-up punishment is meted out if the individual claims to not have the cash to pay the fine. Those found without a mask had to do up to 50 push-ups, while those who were wearing one improperly were punished with 15.

They may also be asked to sweep the streets.

“90 per cent of the violators are foreign tourists. When we saw them breaking rules, we sometimes felt they did not respect us,”

Suryanegara also told Indonesian news outlet Kumparan that foreigners often underestimate the protocols in place because they have the means to pay the fines.

“So, sometimes we feel that our dignity as officers is humiliated. Oh I just pay, they say,” he said.

He added that at times these foreigners would even pretend to not understand English.

With almost a million Covid-19 cases, Indonesia has the highest number of cases and deaths in South-East Asia.

ALSO READ: Groom in Indonesia made to do push-ups on wedding day because he didn’t wear a mask