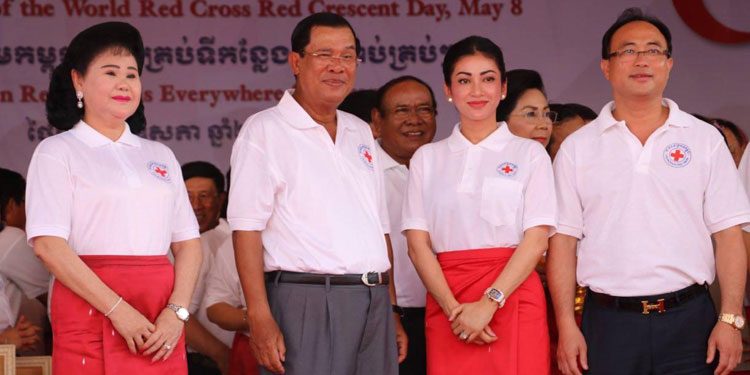 Neak Oknha Kith Meng, president of the Cambodian Chamber of Commerce and chairman and CEO of The Royal Group, and his wife Mao Chamnan, have contributed $200,000 to assist the Cambodian government in its rescue efforts as the country is hit by floods.

On his official Facebook page yesterday, Prime Minister Hun Sen thanked Meng and other generous donors to the emergency fund, which by yesterday had accumulated $4,810,000.

“This fund will be directed to helping people affected by the floods through the National Committee for Disaster Management,” the premier said. “We have good friends during this hardship.”

According to Khun Sokha, spokesman for the National Committee for Disaster Management, the floods, caused by rainfall, have hit 18 provinces and Phnom Penh, affected around 100,000 people and seen 10,000 people evacuated.

“Recent floods have inundated about 24,666 houses, 39,462 hectares of rice fields, 34,188 hectares of subsidiary crops and 54 schools, which have been damaged or destroyed,” he said.

Meanwhile, on Tuesday, the Ministry of Water Resources and Meteorology announced that more heavy rain would hit Cambodia this week due to two tropical storms – named Nangka and Saudel.

Because of this, the ministry has called on people to be on the alert for  thunderstorms, lightning and strong winds, especially those living in lowland areas near waterways and mountainous areas as well as fishermen and seafarers.