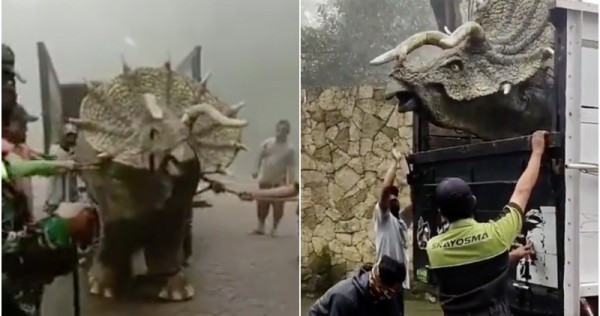 With 2020 being such a chaotic year, we’d think that things can’t get any more bizarre than they already are. However, this viral video of a realistic-looking dinosaur has proven us wrong.

In a 30-second clip circulating on Twitter this week, a massive Triceratops can be seen being unloaded from the back of a truck. The video comes with the caption “Alhamdulillah piaraan baru udah nyampe”, which translates to “Praise God, the new pet has arrived”.

As the prehistoric creature slowly emerges from the vehicle, it can be seen jerking, as if it is trying to break free from its restraints.

The military officers and animal handlers who are helping it out of the truck also appear to be struggling to keep the dinosaur under control with ropes that are tied around it.

The clip has been viewed over a million times since it was shared on Monday (Dec 14).

While the Triceratops looks unnervingly realistic, it is actually a very elaborate costume that was done up for Mojosemi Forest Park’s promotional holiday video, and hidden underneath the dinosaur were a bunch of park employees, Indonesian media reported.

The outdoor recreational park in East Java has a dinosaur zone where visitors can pose for photos with a T-Rex or Brachiosauruses.

A visitor had apparently managed to take a quick video of the creature before leaking it online, the park’s deputy commissioner said.

However, some netizens suspect that the clip had been purposely released as part of an advertising campaign.

A day after the footage went viral, the park itself released a three-minute video of the Triceratops on its social media accounts.

Amused netizens tweeted in response to the clip, with one asking: “Did the dinosaur in Jurassic World run away to Indonesia?”

Others are disappointed that the dinosaur isn’t real, as one tweeted: “Apparently this wasn’t real lol though I’d be happy if real dinosaurs were still alive and existing”.