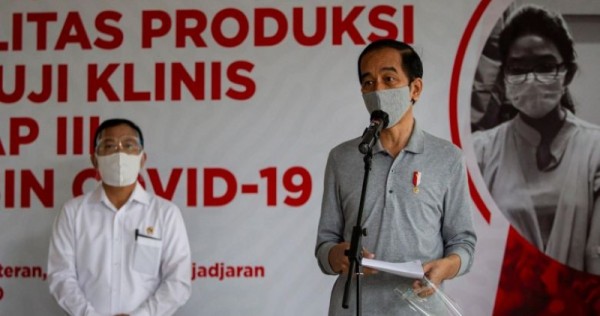 President Joko “Jokowi” Widodo has expressed his willingness to be among the first people to be injected with the Covid-19 vaccine once it is ready for use.

“We are going to buy a vaccine from a brand that is listed with the World Health Organisation. I’m not saying which brand just yet, but as long as it is on the WHO list, we’re going to use it,” the President said.

In Sanya, China, Retno and Erick oversaw two deals between state-owned pharmaceuticals firm Bio Farma and China’s Sinovac Biotech that would give Indonesia the equivalent of 50 million doses of the potential vaccine from November to March and priority access for the rest of 2021.

Indonesia is already cooperating with Sinovac in phase three clinical trials of the vaccine candidate, with tests being carried out on 1,620 volunteers in Bandung since August.

The government also looked into partnerships with two other Chinese drug manufacturers, Sinopharm and CanSino Biologics.

In Abu Dhabi, the ministers oversaw deals struck between state drugmakers Kimia Farma and Indofarma, as well as Group 42 (G42) Health Care, an artificial intelligence-based Emirati company that is actively involved in the research, development and distribution of Covid-19 testing and treatment applications.

G42 signed an agreement with Kimia Farma to develop vaccines and another with Indofarma to develop test kits using laser technology and AI to detect the virus.

Thai PM says all laws to be used against protesters