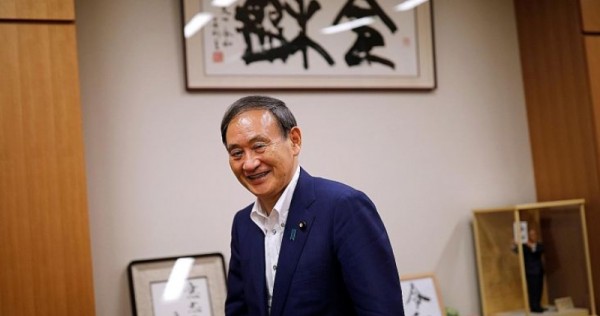 TOKYO – Mr Yoshihide Suga is on course for a landslide victory in the race to become Japan’s next prime minister, an Asahi newspaper tally showed, as debate kicks off later Wednesday (Sept 9) among the three candidates vying to succeed long-time leader Shinzo Abe.

That means Suga already has 58 per cent of total LDP votes – more than the majority required – without even counting the additional 141 votes that will come from party prefecture chapters.

The party leadership election will be held on Sept 14, a date set after Abe’s decision to step down for health reasons.

The winner is virtually assured of becoming premier because of the LDP’s parliamentary majority.

Suga, former defence minister Shigeru Ishiba and ex-foreign minister Fumio Kishida will appear in a televised debate on Wednesday, making the case for who should lead the country after nearly eight years under Abe.

Abe had early success with his “Abenomics” economic initiatives but the coronavirus pandemic has eradicated those gains.

Japan, the world’s third-largest economy, sank deeper into its worst postwar recession in the second quarter of this year with a record 28 per cent annualised contraction, government data showed the previous day.

Suga said on Tuesday the biggest job for the new prime minister would be to revive the coronavirus-ravaged economy.

Ishiba has been a popular figure among the public while Kishida has the diplomatic experience that Suga lacks, but they have only a fraction of the LDP support that Suga enjoys, the Asahi tally shows.