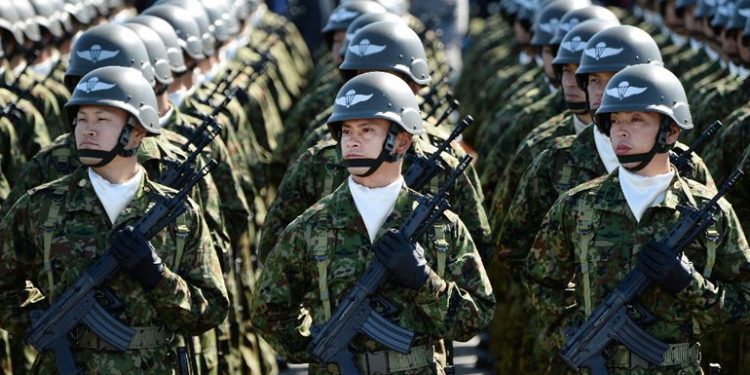 TOKYO, (Xinhua) –   Japan’s Defense Ministry have requested a record 5.49 trillion yen ($51.93 billion) budget for the fiscal year starting in April 2021, with the request rising 3.3 percent from the initial budget for the current fiscal year through March 2021.

With the ministry eyeing allocations for enhancing capabilities in outer space, cyberspace as well as financing for land-based infrastructure and hardware, Japan’s defense spending under new Prime Minister Yoshihide Suga is looking set to rise for the ninth straight year.

The amount, exceeding the initial budget for the current fiscal year, was decided on at a ministry meeting attended by Japan’s Defense Minister Nobuo Kishi.

The ministry’s request for spending on outer space-related capabilities totaled 123.7 billion yen, a sizable leap from the 104.7 billion yen sought for the same program a year earlier.

In terms of upgrading the nation’s cybersecurity capabilities, meanwhile, the ministry has requested 35.7 billion yen, compared to 23.8 billion yen sought a year earlier.

If approved, this allocation will be used to create a new unit within the Self-Defense Force (SDF) comprising around 540 personnel charged with matters pertaining to cyberspace and security.

Other allocation requests by the ministry included outlays for electronic intelligence-related infrastructure and hardware, as well as funding for research into anti-drone lasers.

As for an alternative to the now-scrapped plan to deploy U.S. made Aegis Ashore land-based missile defense systems, the ministry did not request a specific budget.

Similarly, an amount for the realignment of U.S. forces in Japan was not specified by the Defense Ministry during the meeting convened Wednesday.

The total budget will be finalized by the Defense Ministry prior to the fiscal 2021 budget being compiled at the end of December.

Before Jet Li, this actor played Wong Fei Hung in 80 films and made the martial arts legend a household name