Japanese restaurateurs in Cambodia feasting on demand for their food 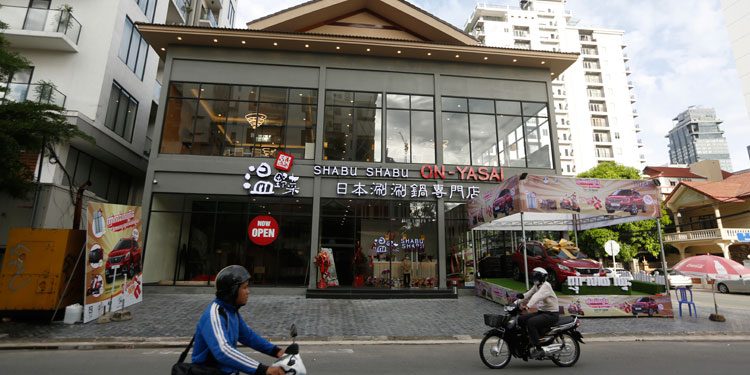 The number of Japanese restaurants in Cambodia has been growing, reaching several hundred.

Mikami Masahiro, Japanese ambassador to Cambodia, said during the opening of Japanese restaurant SHABU SHABU ON-YASAI, on Pasteur, Phnom Penh, that Japanese food is becoming more popular among Cambodian people in the capital. He said so far there are about 300 Japanese restaurants operating in Cambodia.

Minister of Tourism Thong Khon, who also attended the opening ceremony, said that Cambodia is a close friend of Japan and welcomes all types of Japanese investment, especially in the tourism sector.

“Cambodia has a lot of potential that is favourable for investment in tourism, especially ecotourism, agro-tourism as well as rural tourism,” he said.

Cambodia welcomed a total of more than 6.6 million international tourists last year, an increase of 6.6 percent on 2018, of which 207,636 were Japanese, ranking in seventh place among the Kingdom’s top 10 foreign visitors, according to figures from the Ministry of Tourism.

Khon said, however, the global epidemic of COVID-19 has severely affected tourism and travel around the world, including Cambodia.

“[We] would like to thank the Japanese investors in the tourism sector, including hotel owners, restaurants and supermarkets, who always show confidence through investing heavily in Cambodia,” he said. “Cambodia is always welcoming and provides good hospitality to Japanese investors and tourists.”

The minister has also called on relevant ministries, institutions, local authorities, businesses, tour operators and the people to continue to support and pay attention to the development of Cambodia’s tourism sector.

Chhay Sivlin, president of the Cambodia Association of Travel Agents, said that it’s a good move to attract more Japanese investors and visitors to Cambodia

“Now we are lacking in standard restaurants to welcome foreigner tourists, especially  Japanese visitors who want to eat their native food when they arrive in Cambodia,” she said,  adding that having a huge and standard food service will attract more visitors to stay in Cambodia longer as well as provide benefits for local people in the areas of both jobs and products.

“As I know some Japanese business projects will use local products which is helping support the local producer and this is a good point that will attract both locals and foreigners,” she said.

Cambodia has become an inviting place for big Japanese investors over recent years, such as the AEON investment project. The Japanese also see potential in the agriculture sector, which is not being used fully because Cambodia does not have much of a processing industry.

Mikami said before making decisions, Japanese companies tend to examine the situation very carefully but, when they do invest, they will stay for a long time. He said many Japanese companies also seek value-added production in high-tech and processing sectors.

However, Japanese investors in Cambodia have also raised concerns about certain challenges and called on the government to do more to facilitate doing business in order to boost trade and investment between the two countries.

Currently, there are about 270 Japanese companies that are members of the Japanese Business Association of Cambodia.

Cambodia and Japan’s bilateral trade rose by 13 percent last year to about $2.3 billion, according to a recent report from the Japan External Trade Organisation.

In the first seven months of this year, the two-way trade between the countries was $1.17 billion, down 5.7 percent compared with the same period last year.

Dengue antibodies may be making Thais immune to Covid-19