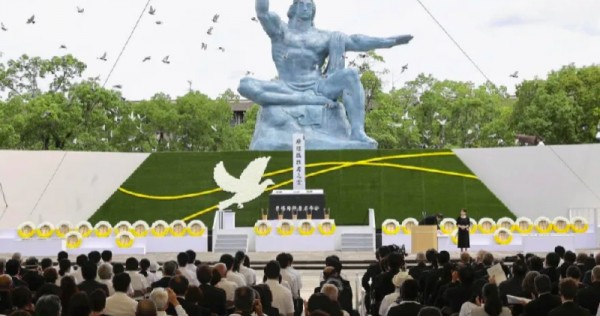 Japan on Tuesday (Aug 9) marked the 77th anniversary of the atomic bomb attack on Nagasaki city, with addresses at the ceremony heavy with warnings of the growing possibility of nuclear proliferation and worsening clashes of conventional forces around the globe.

“The use of nuclear weapons against Hiroshima and Nagasaki caused a humanitarian catastrophe unique in history,” UN Secretary General Antonio Guterres said at the memorial event.

But he added that “today the prospect of nuclear conflict has been brought back into the realm of possibility”.

“The Russian invasion of Ukraine reminds us that we are, at any time, just minutes from possible annihilation,” Guterres said. “Meanwhile, dangerous rhetoric and nuclear threats demonstrate that these are weapons of brinkmanship and coercion.”

“In these times of high tensions and low levels of trust, we should draw on the lessons of Nagasaki. Disarmament, reconciliation and the pursuit of peace are the only way forward – for all our sakes.”

Nagasaki Mayor Tomihisa Taue echoed those sentiments, saying Russia’s threats to use nuclear weapons had “sent shivers across the globe”.

The crisis in Ukraine had “shown the world that the use of nuclear weapons is not a groundless fear but a tangible and present crisis”, he said, and reiterated the city’s desire that all nations abolish their stockpiles of nuclear weapons.

While China was not identified by name during the speeches, an unprecedented five days of large-scale manoeuvres off Taiwan meant the military threat posed by Beijing was also being watched in Japan.

An editorial in the conservative Sankei newspaper on Tuesday said China’s “missile tantrum” posed a danger to the broader Asia-Pacific region, and to ignore the fact that Chinese missiles splashed down in Japan’s exclusive economic zone “would be unforgivable”.

The Yomiuri published a similar editorial in which it declared the Chinese exercises were “designed to simulate an invasion of Taiwan”. It added: “Threatening to endanger the entire region, including Japan, is absolutely unacceptable.”

In the run-up to the Nagasaki memorial, China demanded that Japan stay true to its non-nuclear principles and suggested the Japanese government was “conniving” on the issue by being covered by the US nuclear umbrella.

Wang Wenbin, a Chinese foreign ministry spokesman, said Japan commemorates the atomic attacks on Hiroshima and Nagasaki “without any deep reflection about the history of aggression”, alluding to Japanese invasion and occupation of other Asian nations in the early decades of the last century.

In response to events surrounding Taiwan over the last week, the Japanese government carried out a simulation of the political and diplomatic response to a Chinese assault on Taiwan, while the Maritime Self-Defence Force on Monday launched exercises according to a scenario in which there was “a threat to Japan’s existence”.

“For most Japanese, everything that is happening now makes it all seem so much more real than before,” said Hiromi Murakami, a political science professor at the Tokyo campus of Temple University. “People never thought that nuclear weapons would ever again be used, but now they are not so sure. And that is very scary.”

While the greatest fear of a conflict devolving into a nuclear exchange is still centred on Ukraine, last week’s events surrounding Taiwan have left some concluding that Japan is effectively on the “front line in northeast Asia”, Murakami added.

“We have seen the very strong Chinese reaction to [US House Speaker Nancy] Pelosi going to Taiwan, missiles falling into Japanese waters, the pressure that is being applied. And I think there is a new awareness here that anything that happens to Taiwan will inevitably involve Japan as well,” she said. “People suddenly feel a lot more threatened.”

During his visit to Japan, Guterres also called on Ukraine and Russia to grant international inspectors access to the Zaporizhzhia nuclear facility, which has come under sporadic shellfire in recent days. An attack on a nuclear plant is “suicidal”, he said, and warned of a prolonged conflict.