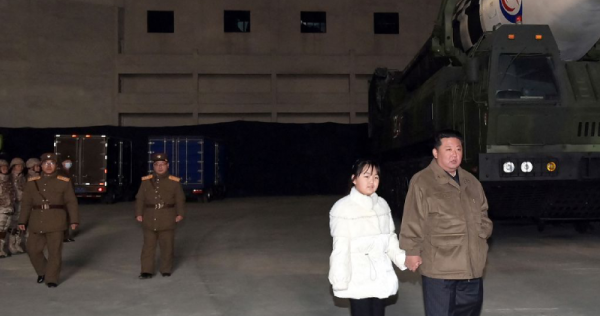 A potential successor, or just daddy’s little girl? That is the question being asked as North Korean leader Kim Jong-un’s only daughter emerged at a high-profile event for the second time in nine days.

The girl, believed to be Kim’s second child named Ju-ae and about nine years old, was first seen in pictures published by state media on Nov 19. She was shown with her parents observing the North’s intercontinental ballistic missile (ICBM) launch the previous day.

On Sunday (Nov 27), photos released by the state Korean Central News Agency (KCNA) showed her wearing a long black winter coat with her hair partially tied back, walking hand in hand with her father.

The pair took photos with scientists, officials and others involved in what was described as the test-launch of its Hwasong-17 ICBM.

KCNA described her as Kim’s “most beloved” or “precious” child, a more honorific title than her previous description of “(Kim’s) beloved” child.

The new photos and the designation added to speculation that Ju-ae was next in line to rule the country.

Kim Sung-min, a Seoul resident who defected from North Korea, told This Week in Asia that such appearances were highly staged and had deep political significance.

“In North Korea, the leader’s every little gesture has political implications. Even if Kim Jong-un is an indulgent daddy for his little girl, I don’t think he just took her along with him to such high-profile events without political meanings,” Kim Sung-min said.

Kim Jong-un himself accompanied his father Kim Jong-il on various inspection trips. The late Marshall Hyon Chol-hae was the first among North Korean military leaders to catch on that Kim Jong-un was being groomed as successor – a realisation that brought him career success and high status, said Kim Sung-min, who runs Free North Korea Radio.

“Many top party officials and military generals probably think they’ve taken a cue from the leader and will soon begin to show support and loyalty to her,” he added.

The earliest signs Pyongyang was engineering a cult of personality around Kim Jong-un came as early as 1992, when a song of praise for him, titled “The March”, began to be performed publicly before party officials.

Male chauvinism is still strong in North Korea and a female leader might have been unthinkable in the past, but this attitude is being shattered by the rise of Kim Jong-un’s sister Yo-jong as his de facto No. 2, some analysts say.

The North’s top newspaper Rodong Sinmun on Sunday said attendants at the event pledged loyalty to the “Paiktu bloodline”, referring to the Kim dynasty, in a joint “letter of loyalty” they wrote to Kim Jong-un, according to KCNA.

On Sunday, the state newspaper splashed the front and second page with 15 pictures showing the daughter accompanying her father.

“Rodong Sinmun has hinted in clearer terms than before that Ju-ae would be the successor when it described her as the leader’s most beloved child,” analyst Cheong Seong-chang of the private Sejong Institute said.

“For a king who has many children, it’s natural for him to make his most beloved child as his successor,” Cheong said, adding Ju-ae was likely to continue appearing with her father at public events and undergo succession training.

Kim Jong-un is believed to have three children: a boy born in 2010, Ju-ae born in 2013 and another son born in 2017. There are scant details around the names of the sons or other information concerning the children, said Yang Moo-jin, a political-science professor at the University of North Korean Studies in Seoul.

Yang also warned about reading too much into the daughter’s public appearances, which may be linked to Kim Jong-un’s attempt to be seen as a stable father figure.

“A real successor would be tightly kept under wraps before a personality cult around the successor starts increasing. But the fact that Ju-ae has been unveiled so early indicates that she is not the successor,” Yang said.

“Rather, Kim Jong-un wants to project an image of a caring father with a normal family, which would help boost the stability of his leadership.”

Leif-Eric Easley, a professor at Ewha University in Seoul, said by connecting his daughter to what the North claims is the world’s most powerful weapon, Kim Jong-un is “trying to maximise political benefits of the Hwasong-17”.

In recent months, Pyongyang has escalated provocations with its brand of one-upmanship against US-South Korean military drills.

Promoting generals and releasing footage of smiling family members may be Kim’s way of claiming victory after tit-for-tat displays of military might, Easley said.

“However, these developments aren’t enough to predict an end to North Korea’s current provocation cycle or jump to conclusions about Kim’s health or anointed successor,” he added.