Indonesians are growing wary of China and want to contain its rise, survey finds 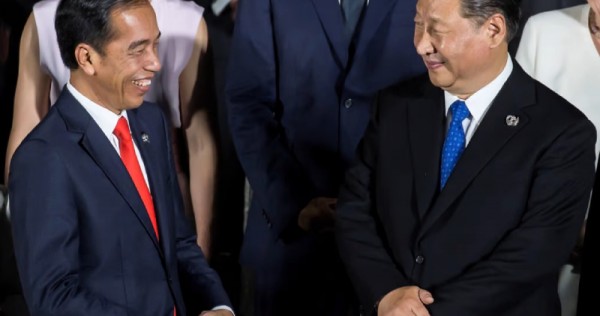 Indonesians are becoming increasingly wary of China and Chinese investments, with six in 10 surveyed by an Australian think tank agreeing that Jakarta should join with other nations to limit Beijing’s rise.

Only 43 per cent of Indonesians polled by the Lowy Institute in December said they felt China’s growth was good for Indonesia – down from 54 per cent in 2011. Almost half the 3,000 respondents aged 17-65 said they believed China’s aim was to dominate the region.

More favourable views towards investments from the United States and its importance to Indonesia’s economy were expressed in the survey, but Washington’s influence did not hold too much sway – 84 per cent of respondents still said Indonesia should stay neutral in any US-China conflict.

Respondents in the world’s biggest Muslim-majority nation reserved their warmest feelings for Saudi Arabia, Japan, the United Arab Emirates, Singapore and the Palestinian territories. The leaders of Saudi Arabia and the UAE ranked top for popularity compared to other foreign leaders.

The Lowy Institute said the responses “show that Indonesians see the world through a wider lens than great power rivalry”.

Yet the differences in sentiment towards the US and China are striking given their efforts to engage with Indonesia in recent years.

The US consistently fared better across a range of indicators from military leadership and security concerns to economic partnerships – despite the latter being the foundation of China’s ties with Indonesia. Only 42 per cent of respondents said that they trusted China to act responsibly, a decrease of 18 percentage points since the 2011 poll, while 56 per cent said they trusted the US, a 16-point fall compared to a decade ago.

Evan Laksmana, senior research fellow at the National University of Singapore’s Centre for Asia and Globalisation, and one of the survey’s authors, said that Indonesians’ perspectives on China had been shaped by how political elites in Jakarta engaged with Beijing in recent years.

“The way the Indonesian elites have presented Indonesia’s growing engagement with China has been very critical,” he told This Week in Asia . “Whether it’s about the influx of Chinese workers to Indonesia, whether it’s about Chinese behaviour in the North Natuna Sea, which has escalated over the last few years, I think all this comes into play to how the Indonesian public views China.”

“China is not just seen as an economic opportunity, but it actually comes with a set of challenges,” Laksmana added.

Asked about specific countries that pose a threat to Indonesia within the next decade, nearly half of respondents, or 49 per cent, pointed to China – a 10-point increase on the previous survey result – while 43 per cent said the US posed a threat to the nation.

Among only non-Muslim respondents, those numbers fell to 32 per cent and 28 per cent, respectively.

Indonesia needs both the US and China for growth and stability, he said, so “it’s equally difficult, equally challenging and I think this [poll] provides us with parameters of how we should move forward”.

The top perceived threat to Indonesia, according to 63 per cent of survey respondents, was separatism, followed by the Covid-19 pandemic and other health crises.

Laksmana warned, however, that “only a small number of respondents actually follow international events closely and travel internationally … so you have to take their perception of foreign affairs with a pinch of salt”.

Jakarta has in recent years boosted its ties with China, the US and regional allies Japan and South Korea, seemingly unmoved by the views the country’s 272 million people have on foreign policy.

China is by far Indonesia’s largest trading partner and one of its biggest foreign investors. Last year, bilateral trade reached more than US$110 billion (S$150 billion)– a 54 per cent increase from 2020 – according to the Indonesian government data, and China invested some US$3.8 billion in over 1,800 projects.

Only Singapore, with US$9.4 billion, and Hong Kong, with US$4.6 billion, invested more. The US, meanwhile, was fourth with US$2.5 billion worth of investments in 824 projects.

The survey found that while most respondents believed democracy was “the best system of government”, many also held “high levels of confidence in authoritarian or unelected leaders of other countries”.

Indonesia’s President Joko Widodo ranked top for trustworthiness, with 74 per cent of respondents saying that they have a lot or some confidence in him. Saudi Arabia’s Crown Prince Mohammed bin Salman (57 per cent) and the United Arab Emirates’ Sheikh Mohamed bin Zayed Al Nahyan (52 per cent) followed next.

The latter two leaders have enjoyed increased name recognition among Indonesians as Jakarta has undertaken increased economic engagement with rich Gulf countries over the past year in a bid to attract investment and source financing for the relocation of the country’s capital .

Four in 10 said they had confidence in Vladimir Putin, though the survey was conducted before Russia’s invasion of Ukraine. Chinese President Xi Jinping and North Korea’s Kim Jong-un were tied in the confidence stakes, with each backed by 34 per cent of respondents.