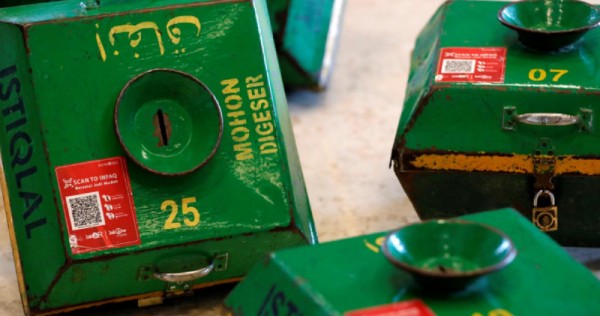 The National Police have said 20,068 alms boxes in 12 regions were used to raise money and fund activities for the Jaamah Islamiyah terrorist group.

“We learned of the number of alms boxes based on information from a suspect named Fitria Sanjaya, also known as Acil,” he said on Thursday as reported by tribunnews.com.

The arrested suspect was a member of the foundation, he added.

Most of the alms boxes were found in Lampung province with 6,000 boxes, followed by 4,000 boxes in North Sumatra, 2,000 in Yogyakarta, 2,000 in Magetan and 2,500 in Malang, East Java. Boxes were also found in Jakarta, Central Java’s Pati, Semarang, Pati, Temanggung and Surakarta and Ambon in Maluku.

Argo further said that the group had started distributing boxes because it was limited in operational fund sources. The organization aimed to raise money from the public through the charity boxes and religious gatherings.

“Jamaah Islamiyah is trying to get involved with the public as it becomes more difficult for them to collect donations from its members,” he said.

National Police spokesman Brig. Gen. Awi Setyono said on Nov. 30 that the alms boxes were among sources of funding for the group besides a company belonging to JI’s members.

“We found that these boxes were misused and were placed in convenience stores across Indonesia,” Awi said

The funds were allegedly used for various purposes, from sending JI members to Syria to purchasing weapons and explosives.

Argo said there were ways for people to recognize the alms boxes linked to JI.

“The first characteristic is that some of the boxes are made of glass with aluminum frames, found in Jakarta, Lampung, Malang, Surabaya, Temanggung, Yogyakarta and Semarang,” Argo said.

Flyers about the foundation’s program were also usually placed near the charity boxes.

The boxes could also be found in small restaurants where placement would only require permission from the restaurant without any special permits.

The boxes were also disguised in other ways to blend in with regular alms boxes, Argo further said.

The National Police’s antiterror squad, Densus 88, is investigating whether other terrorist groups have raised money the same way.

Meanwhile, the head of the Lampung branch of the Indonesian Mosque Council-Preachers Association (IK-DMI), Gus Dimyathi, said none of the 4,000 charity boxes allegedly belonging to JI were found in mosques across Lampung.

The boxes were camouflaged as charities for orphans, natural disasters or mosque buildings and found in restaurants, convenience stores, small stores or gas stations.

“This must be made clear to the public that none of the 4,000 [JI alms boxes] were found in mosques and prayers room in Lampung,” Dimyathi said.