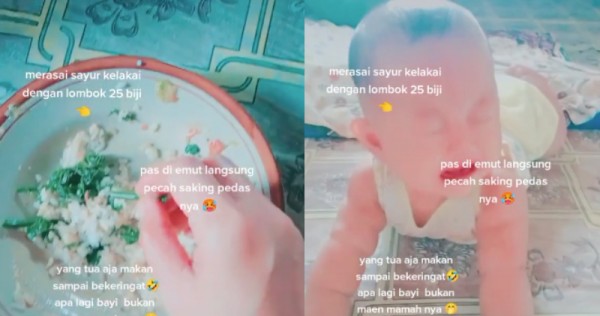 Parents are generally encouraged to include some fibre in their children’s daily meals.

Unfortunately for an infant boy, his mother went overboard by feeding him a veggie stir-fry dish filled with some 25 chillies while documenting his reaction on TikTok, seemingly just for the views.

The young child burst into tears as his mum recorded the moment.

The Indonesian woman uploaded the video to her personal TikTok account Ceooppakalteng03 on Tuesday (May 24).

“Tasting sayur kelakai (stir-fried Lemidi, translated to English) that was made with 25 chilli peppers. Adults can get sweaty eating this dish, let alone babies. His mum is unbelievable,” the woman wrote in the TikTok video, referring to herself in the third person.

Lemidi is an edible fern commonly found in Central Sumatra.

Ceooppakalteng03 fed her son a single stalk of the vegetable dish and after a few munches, heat from the chillies hit him and he started bawling.

The chilli peppers used in this dish are sometimes known as Capsicum Annuum and it has a Scoville Heat Unit (SHU) of 0 to over 800, according to HRSeeds, an online site on heirloom seeds.

Even though chilli peppers with an SHU of zero to 2,000 are generally understood as mild, it’s no food to be feeding an infant.

Ceooppakalteng03 turned off the comments for the video, suggesting that there were negative comments aplenty.

Upset netizens let their thoughts be known by dropping comments on her other TikTok videos.

“Just for laughs, you feed your child with spicy food. Such smart thinking,” one wrote in Bahasa Indonesia.

In November 2021, a Singapore-based mother also fed her young child some spicy food and posted it up online.

There was much less furore online after her two-year-old toddler barely bat an eyelid as she gobbled down spicy Samyang ramen like a champ.