Indonesia sees Cambodia as potential market for its batik 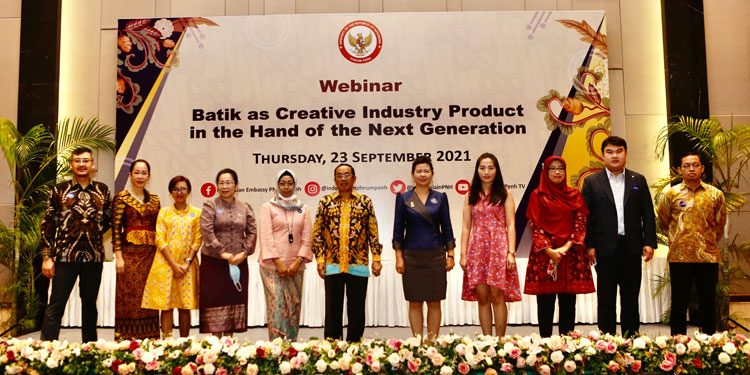 The Indonesian Ambassador to Cambodia yesterday said he expects that Cambodia would become a strong market for Indonesian batik, a method of dying patterned cloth unique to Indonesia.

The Indonesian Embassy to Cambodia yesterday held a webinar on “Batik as a Creative Industry Product: Batik in the Hands of the Next Generation” with the Cambodian business community.

The webinar also aimed to showcase its prospects in the international market and pique the Cambodian market’s interest in Indonesian batik, especially the motifs, patterns, colours and designs that are popular in Cambodia.

Batik is a traditional Indonesian technique for dying fabric in intricate patterns. Wax is applied in specific shapes and designs before the fabric is dyed. The wax resists the dye, creating a unique effect. When done in layers, it can produce very detailed patterns and designs. It was designated as a Masterpiece of Oral and Intangible Heritage of Humanity by UNESCO in 2009.

Ambassador of the Republic of Indonesia to the Kingdom of Cambodia Sudirman Haseng said that batik for the Indonesian people is not only a cultural heritage, but has become a creative industry that supports millions of people, has markets and fans from various economic levels and various ages, and from various corners of Indonesia to foreign nations.

“Batik is not just a piece of painted cloth. A piece of batik contains a philosophical meaning that describes the depth of thought, mindset and life of the Indonesian people,” he said.

Ambassador Haseng also said that the batik industry continues to grow very rapidly throughout the country. Batik is increasingly being worn by the people, appearing on various world-class fashion stages, and is also proving to have significant benefits to the people of Indonesia.

He said this webinar was part of a joint effort to promote batik, especially in Cambodia, “a country that has traditionally had close ties with Indonesia in the past centuries. With similar weather to Indonesia and historical and cultural factors that sometimes overlap, I believe that Cambodia can become a niche market for Indonesian batik.”

According to the ambassador, batik has various comparative and competitive advantages in the domestic and international markets. Even during the pandemic, according to data from the Indonesian Ministry of Industry, batik’s export value increased.

He also said that the main export markets for Indonesian batik include Japan, the United States, and Europe. Batik has become part of the fashion industry, including during the pandemic with the presence of batik-patterned masks. As an industry, there are more than 47,000 batik business units, spread across 101 centres and together they employ a workforce of more than 200,000 people.

Ambassador Haseng was particularly pleased at the involvement from Cambodia businesswomen, and hoped this would also be an inspiration for the batik creative industry in Indonesia to continue to ignite the spirit of globalising batik in Cambodia.

Madame Tex Simheang, managing director of Keimeas Cambodia, said that when batik is mentioned to Cambodian people, they are unfamiliar with the word. But when patterned Khmer sarongs are described, they understand perfectly.

“The batik of Indonesia is similar to the Khmer sarong print, although designed slightly differently. They are also popular in Cambodia. It is easy to wear, nice as a gift, and can be used to produce other products as well,” said Simheang.