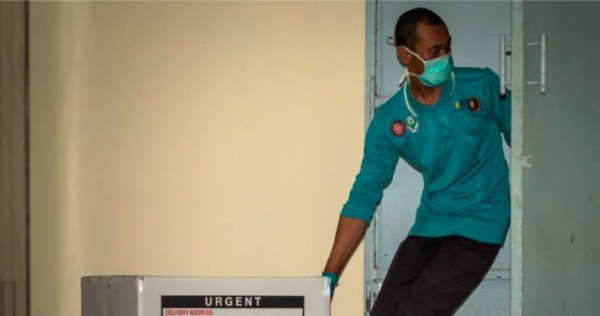 JAKARTA – Indonesia’s mass vaccination programme is set to start next week, a senior minister said on Monday, pending authorisation from the country’s food and drug agency (BPOM), as about 700,000 doses of vaccines have already been widely distributed.

Currently battling one of Asia’s most stubborn coronavirus epidemics, Indonesia has secured more than 329 million doses of Covid-19 vaccines, most notably from Pfizer and its partner BioNTech, and AstraZeneca.

Those to be used in the first phase are CoronaVac, the vaccine of China’s Sinovac, of which Indonesia has received 3 million doses.

Airlangga Hartarto, the country’s chief economic minister, said the vaccination programme is scheduled to start next week, pending data from BPOM, which he said draws findings from the clinical trials in Brazil and Turkey.

The vaccine will be administered for free across the archipelago, with the rollout expected to be completed within 15 months.

Indonesia’s state-owned drugmaker Bio Farma has already dispatched about 714,000 CoronaVac doses to the country’s 32 provinces, it said on Monday.

Bambang Heriyanto, corporate secretary for Bio Farma, told Reuters the vaccines had been pre-positioned to save time and allow inoculations to start as soon as BPOM’s authorisation is given.

Senior BPOM official Lucia Rizka Andalusia said interim data from late stage clinical trials in West Java plus findings from Brazil and Turkey needed to be studied, but she was hopeful the emergency use authorisation would be issued.

Early results from CoronaVac late-stage trials showed it was 91.25 per cent effective, while researchers in Brazil have said it was more than 50per cent effective, though full results were yet to be released at the company’s request.

Budi Gunadi Sadikin, Indonesia’s health minister, has said that Indonesia needs to inoculate about 181 million people, or roughly 67 per cent of its population, to reach herd immunity.

He said 1.3 million health workers would be first in line for the shots, followed by public servants.