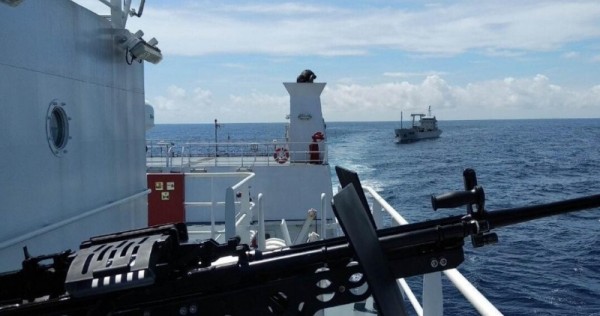 The move to equip the force, Bakamla, is seen as a delicate balancing act by Indonesi a to deal with Chinese incursions without jeopardising growing bilateral ties with Beijing and at the same time defuse potential domestic anger over China’s encroachments, say analysts.

Over the past decade, China has emerged as Indonesia’s largest trading partner, with bilateral trade reaching US$79.4 billion (S$106 billion) in 2019 – a tenfold increase over 2000.

Indonesia is also dependent on China for its Covid-19 vaccine , with 1.2 million doses of China’s Sinovac jabs having arrived in the country on Dec 6.

The decision also comes amid mounting tensions in the South China Sea , which is claimed by China and other countries. Indonesia does not consider itself a party to the South China Sea dispute, but Beijing claims historic rights to areas around the Natuna Islands.

“Permission was granted as we are an enforcement agency that has to face the risk of dealing with violators of the law who are very likely to be armed,” said Wisnu, adding that the weapons on the Bakamla vessels were for self-defence.

He said Bakamla was a professional agency that would not “detain trespassing ships” or use force unnecessarily.

Joko Susanto, a lecturer of Maritime Geopolitics and Naval Strategy at Airlangga University in Surabaya, said there had been “many calls from parliament and the public” to strengthen Bakamla “because in Indonesia, the China issue could easily be inflamed in the press by the opposition and parliament.”

Susanto said that by expanding the capacity of Bakamla, it helps to ease the situation somewhat and limits anti-China groups from growing.

Agus Widjoyo, a retired three-star general and governor of the National Resilience Institute, a government think tank, said that although China claims the waters in Indonesia as its “traditional fishing grounds” and therefore  insists it has the right to sail its coastguard vessels in these waters, a “trigger-happy attitude” in the waters “would not be productive” for either side and could lead to misunderstandings.

He suggested that “diplomacy to find common a denominator would be the most calculated approach” in easing tensions over territorial rights.

Zachary Abuza, a professor of Southeast Asia Studies at the National War College in Washington said he did not view the arming of Bakamla as a “hardening of Jakarta’s position on China”, but as more of a deterrent move to prevent the escalation of tensions

As the ship was being towed to a nearby Indonesian naval base, a Chinese coastguard vessel rammed the fishing boat in an attempt to compel the Indonesian authorities to release it.

“The Indonesian government – which is so economically dependent on China – is terrified of a repeat of any such incident,” Abuza said.

Indonesia also faces incursions into its waters by Vietnamese fishing boats as a result of an unresolved overlapping EEZ dispute with Hanoi, said Collin Koh, a research fellow at the Institute of Defence and Strategic Studies in Singapore.

“Generally, arming the vessels is also a way to cope with an evolving, uncertain South China Sea environment given the spike in tensions lately,” said Koh, although he added that the move would not “alter the balance of coastguard power” in the region.

Koh said that while the power and capability of the bulked-up Bakamla ships was important, the number of ships available for patrolling was “arguably more crucial” because it would allow for a continued presence in the waters.

But he said that regardless of the firepower of the Bakamla vessels, they pale in comparison to China coastguard ships.

“So the arming of the [Bakamla] ships with heavier weapons may enhance deterrence,” he said, but they may “still find it challenging to respond robustly against Chinese or Vietnamese transgressions in the North Natuna Sea”.

Instead, he said, the Bakamla ships would have to rely on the larger ships of the Indonesian Navy for backup.

“Until Bakamla scales up its fleet size to an appreciable quantity, it’s more plausible to envisage this Navy-Bakamla tie-up as a bulwark against Chinese and Vietnamese transgressions,” he said.

China’s stand and actions in the South China Sea are “very calibrated,” said Abuza of the National War College, with Beijing not putting pressure on all claimant countries at the same time out of fear of a “multilateral action”.

Abuza said pushing too hard on Indonesia is always a risk for China because it is the biggest country within Asean and could force a response from Jakarta.

Abuza expects China‘s navy and coastguard to be more focused on the Philippines, Malaysia and Vietnam this year.

Koh said he expects China to settle into a “norm” of routine presence – including the periodic presence of coastguard forays into the North Natuna Sea.

“In other words, the Chinese are likely trying to maintain the current tempo of operations,” Koh said.

“However, depending on the politically expedient situation – such as brewing up of new disagreement with other South China Sea claimants – it is possible for the Chinese to ramp up their activities,” he added.

With the incoming administration of US President-elect Joe Biden, Abuza does not expect the US position on the South China Sea to fundamentally change.

“I expect a similar number of Fonops [freedom of navigation operations]” he said. “But overall the Biden administration is going to be much smarter than the Trump administration about prioritising issues.”

Susanto of Airlangga University sees China’s attitude towards Indonesia as “ambiguous”, wanting to maintain the country as a “non-claimant” in the South China Sea dispute yet testing its “commitment to defending its sovereignty” in the Natuna waters.

Most Indonesians, he said, think the intrusions by Chinese fishing vessels and coastguard ships are Beijing’s way of “testing Indonesia”. If this is the case, he added, the prospects for future ties between the two countries “would not be good”.

“Indonesia will definitely take a firm stance in relation to this … in addition to opening up wider space for anti-Chinese groups” in Indonesia, he said.

When US anger rises at China’s Confucius Institutes, Southeast Asia thinks of the consequences