In tears at border, Ukrainians say they held on until they had to flee 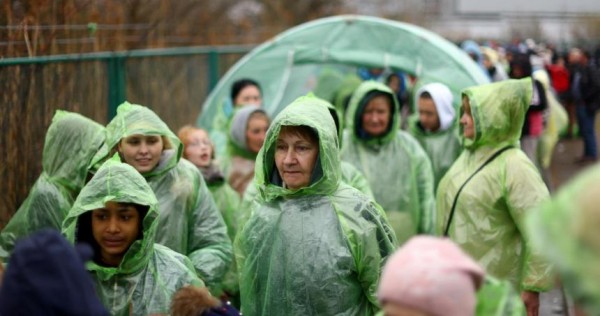 He suffers from arthritis and struggles to move. But, a month into the war, as Russian bombs fell around him, his family told him he had to go to Poland with them.

“There are planes all the time and the sound of bombing all the time, it’s very loud,” he told Reuters tearfully as his family huddled under green tents set up to protect refugees from the rain as they waited at the Shehyni border crossing in Ukraine.

“They did it, they did these horrible things. It’s hard to believe,” he said, choking on his words. “For what? For ambitions? The ambitions of the ‘ruler’?”

Sorokin is one of hundreds of Ukrainian refugees who were waiting in the rain to cross from Shehyni into Medyka, in Poland, on Thursday (March 31). Many had stayed in cities such as Kharkiv and Mariupol in the east until they ran out of supplies.

Russian President Vladimir Putin sent his troops into Ukraine on Feb 24 on what he calls a “special military operation” to demilitarise and “denazify” Ukraine. Ukraine and the West say Putin launched an unprovoked war of aggression.

After failing to capture a single major Ukrainian city in five weeks of war, Russia says it has shifted its focus to the south-east, where it has backed separatists since 2014.

The area includes the port of Mariupol, scene of the war’s worst humanitarian emergency, where the United Nations believes thousands of people have died after more than a month under Russian siege and relentless bombardment.

Alena Kogemiakiva, 25, was carrying all her remaining possessions, including her two pet rats in small backpack.

“I was in Mariupol the whole time,” she said. “We just slowly watched how the number of our homes was getting smaller every day. Everyone I know, they don’t have a house right now.”

Tatiana Victorovna Dumskava, a schoolteacher, said she waited until March 22 to leave Mariupol. It was only when she and her husband had “two sips of water each” left that she realised she had no choice but to leave.

“My apartment was burning right in front of my face. We didn’t have any lights, any electricity, any gas, any water,” she told Reuters. “Our apartment block was destroyed by shelling. There was no balcony left.” But she said that, despite the destruction, she hoped she’d be able to return home in some way.

“We want to go back very badly, to go back to Ukraine. We just want to be in a peaceful place for a few months and then go back home,” she said. “I can’t even imagine not going back there.”