In South Korea, some couriers are paying for same-day deliveries with their lives 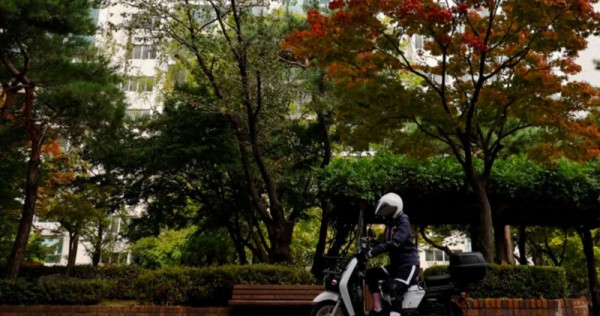 When a 48-year-old delivery man in South Korea died in hospital last month after complaining of chest pains at work, Kim Sung-jin was among those who felt it was bound to happen.

“I wasn’t too surprised when I heard the news,” said Kim, a courier who quit two months ago. “The working environment was inhumane to the point I would go to the side and cry sometimes.”

According to the Korean Confederation of Trade Unions, the deceased man had worked nine to 10 hours a day and delivered an average of 400 packages per shift over his two-decade career with CJ Logistics Corporation, one of the nation’s largest delivery companies.

His death, as well as those of 13 others, has sparked calls for better labour protection for delivery workers, whose workloads have skyrocketed amid the Covid-19 era as conglomerates promise consumers more same-day deliveries than they can handle.

With fewer people shopping outdoors during the pandemic, many apps and online retailers such as Coupang – which coined the term “rocket delivery” – are seeing unprecedented demand, further burdening delivery workers in a digitally-savvy country which last year saw some 97 per cent of people in their 20s using internet shopping, according to Statista.

Kim, who lives in the Seoul suburb of Anyang, said he worked from 7am to 9pm – on a good day.

“On days when I had a lot of packages to sort and deliver, I would be at work until 2am,” he said.

The 38-year-old, who welcomed a baby with his wife in February, said it was tough to think about resigning from a job that was giving the family a monthly income of about 2 million won (S$2,400), especially when the Covid-19 crisis was fuelling unemployment.

But the pressure proved too great to bear. Kim one day broke down in front of his wife, explaining that he could no longer go on.

“I needed to deliver 200 packages a day for six days a week, to earn what I made every month,” Kim said. “Even veteran delivery men I worked with would constantly curse out loud as there was no other way to express the amount of stress and torture we were in.”

The physical toll of the job was not worth the wages, said Kim, who used to be a fitness trainer.

He said he earned about US$0.70 per package after sharing a cut of the commission with middlemen companies hired to manage the deliveries.

“I saw a lot of people quitting because their bodies would not hold up or they thought it wasn’t worth working for the amount of money they were making,” Kim said.

E-commerce in South Korea, which has a population of 51 million, has seen dramatic growth in recent years. It is projected that the country’s online retail volume will grow to US$90.5 billion by 2024, from US$41.9 billion in 2017, data from Statista showed.

South Korea has the world’s second-highest online shopping rate at 54 per cent, according to global customer data science company dunnhumby, second to only China at 61 per cent.

Coupang, founded in 2010, is an e-commerce company that has helped to “revolutionise” the buying behaviour of South Koreans, said Kim Dong-min, 33, an analyst of the logistics sector.

Its goal was simple: to deliver products from fresh food to clothes to a person’s front door in a matter of hours or days, depending on the customer’s preference.

Today, it is the country’s largest e-commerce retailer, with an annual revenue of about US$6 billion.

“Coupang has really revolutionised the way we consume products like milk and vegetables, things we used to go to the actual market to buy at one time,” Kim Dong-min said.

He said that unlike China, South Korea’s delivery sector was struggling because the network was not as organised and it made use of contract workers.

According to a blog post by a Beijing area specialist at Samsung Electro-Mechanics, Chinese online shopping website Taobao was able to handle 1 billion packages per day. The company was able to handle such a volume because it had developed a shipping network that analyses distribution data to deliver items anywhere in China in 24 hours, the specialist wrote.

This feat in a country with a land mass of 9.6 million sq km has been attributed to the decision of its parent company Alibaba, also the owner of the South China Morning Post , to invest in a sizeable network of distribution centres and large fleet of transport vehicles.

“Delivering packages is a technique that takes time to memorise the routes and enough practice at the job,” Kim Dong-min said. “Logistics companies in our country, which tries to cover a lot of ground with part-time workers lacking experience, have not invested in enough manpower to handle the excessive workload at these worksites.”

Meanwhile, the public has rallied behind couriers working under conglomerates such as CJ Logistics Corporation, Lotte and Hanjin, which together control more than 90 per cent of South Korea’s US$5.4 billion delivery sector.

Some people have suggested that the unsustainable workload of couriers may be due to the cheap delivery fees, which usually range from 2,500 to 3,000 won (US$2.20 to US$2.65). Coupang’s “rocket delivery” service is extremely popular as customers can pay a monthly fee of 2,900 won to get guaranteed shipping by the next day, and in some cases, even just hours after you place an order.

“If fees are more expensive, people will stop sending trivial things all the time,” said Cho Changun, a social media user who commented on a news story on Facebook.

Others and trade unions have urged workers to go on strike to demand better labour conditions.

In October, 250 delivery workers at Lotte Global Logistics who were members of the National Delivery Solidarity Labor Union went on a national walkout. They returned to work after four days when Lotte agreed to increase their commission pay and cut transport fares.

The CEO of CJ Logistics Corporation, Park Keun-hee, apologises for the recent deaths of some of its delivery workers on October. Photo: Reuters

CJ Logistics Corporation said it would quadruple the number of workers sorting packages at their facilities to 4,000 and vowed to cover 100 per cent of health and safety insurance for couriers. Its chief executive officer also apologised over the deaths of its workers.

“As a CEO, I feel responsible for the recent series of deaths of delivery workers and apologise for causing significant public concern,” said Park Keun-hee at a press conference on October 22. “CJ Logistics’ management accepts this situation gravely and is investing all efforts on measures to stop such incidents from happening again.”

But the trade unions say the moves by the delivery firms fall seriously short of an overhaul needed by the industry.

“The changes initiated by Hanjin and other companies have not changed what’s at the centre of the problems faced by delivery workers,” said Kim Sae-gyu, a spokesman for the National Delivery Solidarity Labor Union.

“Incidents from overwork will continue to exist if companies aren’t willing to fix the core issues of work hours, low commission payments, and the unfair inclusion of delivery men to extra labour like sorting packages.”

Myanmar’s Suu Kyi favored to win ahead of general election