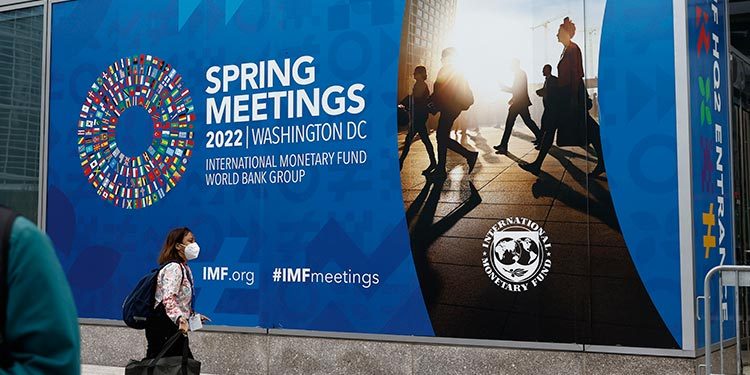 Xinhua – The International Monetary Fund (IMF) on Tuesday slashed global economic growth forecast for 2022 to 3.6 percent amid the Russia-Ukraine conflict, 0.8 percentage points lower than the January projection, according to its newly released World Economic Outlook report.

The Ukraine crisis unfolds while the global economy is “on a mending path” but has not yet fully recovered from the COVID-19 pandemic, the report said, noting that global economic prospects have worsened “significantly” since January.

A severe double-digit drop in gross domestic product for Ukraine and a large contraction in Russia are “more than likely,” along with worldwide spillovers through commodity markets, trade and financial channels.

This year’s growth outlook for the European Union has been revised downward by 1.1 percentage points to 2.8 percent due to the indirect effects of the conflict, making it a large contributor to the overall downward revision, according to the report.

China’s National Bureau of Statistics said on Monday the country’s GDP grew 4.8 percent year on year in the first quarter, marking a steady start in 2022 in the face of global challenges and a resurgence of COVID-19 cases.

Analysts said the full-year growth target of 5.5 percent set by China’s policymakers is still attainable but requires greater efforts, given increasing economic headwinds. Global growth is projected to decline from estimated 6.1 percent in 2021 to 3.6 percent in both 2022 and 2023, 0.8 and 0.2 percentage points lower for 2022 and 2023, respectively, than in the January projection, the report noted.

Inflation has become “a clear and present danger” for many countries, IMF chief economist Pierre-Olivier Gourinchas said at a virtual press meet during the 2022 spring meetings of the IMF and the World Bank. He said even prior to the Russia-Ukraine conflict, inflation surged on the back of soaring commodity prices and supply-demand imbalances, and many central banks, such as the US Federal Reserve, had already moved toward tightening monetary policy. Conflict-related disruptions “amplify those pressures,” said Gourinchas. “We now project inflation will remain elevated for
much longer.”

For 2022, inflation is projected at 5.7 percent in advanced economies and 8.7 percent in emerging markets and developing economies, 1.8 and 2.8 percentage points higher than the January projection.

On the fiscal side, policy space was already eroded in many countries by the pandemic, said the IMF chief economist. “The surge in commodity prices and the increase in global interest rates will
further reduce fiscal space, especially for oil- and food-importing emerging markets and developing economies.”

What make new investment project in Cambodia is on the rise?