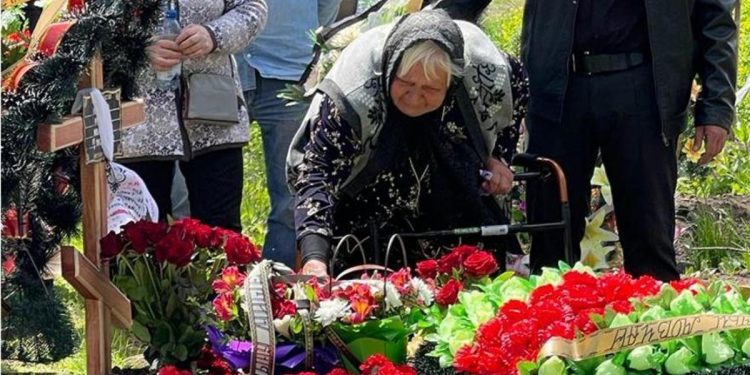 Kharkiv — The first Russian soldier convicted of war crimes in Ukraine asked his victim’s family to forgive him in a Kyiv courtroom on Thursday. “I know that you will not be able to forgive me, but nevertheless I ask you for forgiveness,” Sergeant Vadim Shishimarin, 21, told the wife of the 62-year-old whom he admitted on Wednesday to killing in the early days of the war.

Shishimarin faces up to life in prison. Teams of war crimes investigators are hard at work across Ukraine gathering evidence they hope will lead to more prosecutions of Russia’s invading forces. CBS News went with one of those teams to a village near Ukraine’s decimated second city of Kharkiv and saw first-hand the heartache that both Vladimir Putin’s war, and the effort to document its grim realities, are inflicting on ordinary Ukrainian families.

Tamara clawed at the coffin inside the van. The mother’s naked grief was matched only by her daughter-in-law’s anguished tears. The women were gathered with other friends and family in their village of Malaya Rohan to bury the man they loved, for a second time.

“Why did you take my son?” Tamara, 83, railed against God. But there were no answers for her there by his coffin.

Just two days earlier, war crimes investigators came to Lyudmila Yerchenko’s home to exhume her husband’s body. They’re building a case to bring the people who killed him to justice. Mikhayl Yerchenko, 60, was killed when Russian troops aimed their tank cannons at his village. He and Lyudmila’s humble backyard is now a crime scene.

The widow showed investigators where Mikhayl lay dying after both of his legs were blown off. He’d come out to feed their animals when he was hit by shrapnel, some of which still lay on the ground in their yard. When Mikhayl died, the shelling was so intense that Lyudmila and her neighbors had to leave him there, alone in the yard for 24 hours. The next day they buried him hastily in a shallow grave.

As Lyudmila watched the investigators exhume her husband’s body, we found her grief almost unbearable to witness. It’s a scene playing out for countless families across Ukraine, but watching it without the filter of a television screen is utterly gut wrenching. It’s hard to describe an exhumation. The smell of death lingers long after you’ve left the scene. But even worse is the heartbreak.

Beneath the blanket pulled from the earth lay Lyudmila’s husband of nearly 30 years. She adored him. His family said he was a big bear of a man with an easy smile and a good heart.

Leading the war crimes investigation team was Oleksandr Illenkov, the head of a nerdy team of civil prosecutors who’ve swapped their suits and ties for body armor. “Sometimes it is dangerous,” he told CBS News. “Even now we heard some shelling from here… It’s not a problem. It’s our job. “It was his 14th exhumation in nearly as many days. They try to do their forensic examination quickly, so the families aren’t left waiting.

Two days after he was exhumed, at Mikhayl’s funeral, Tamara implored her son to wake up and come home. She spoke to him as if he was still alive.  She didn’t want to leave the graveside. No mother should ever have to see their child die.

Lyudmila remained brave and dignified as her husband was lowered into his final resting place, but neither of the women were ready to accept that he’s gone.