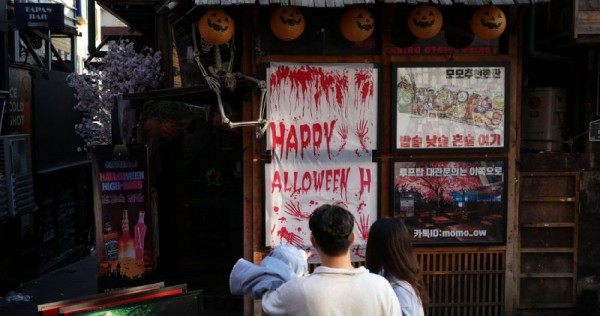 SEOUL – Young people flocking to Seoul’s popular Itaewon district on Saturday (Oct 29) for the first virtually unrestricted Halloween festivities in three years instead found themselves caught up in a deadly crush that killed at least 153 people.

The crowd of partiers, some still in their teens and many clad in Halloween costumes, was ready to enjoy the bars, nightclubs and restaurants where the revelry routinely spills over into narrow and often steep side streets.

But the intimacy of Itaewon’s backstreets turned sinister this Halloween weekend.

Twenty-four hours before, there were already warning signs that the festivities were attracting dangerous numbers of people. On Friday night, a Reuters witness saw crowds in the area packed toe-to-toe at a Halloween street fair with booths for face-painting and selling candy and costumes.

A day later those crowds returned.

Officials say there was no single organised event that drew thousands of revellers to the cramped alleyways where so many young people, including at least 22 foreigners, would die.

But social media posts showed nightclubs and bars advertising Halloween events and promotions, including collaborations at some of the hottest clubs for special performances.

Officials are still investigating what prompted the crowd to surge, but witnesses and social media footage showed people squeezing into the streets for several blocks surrounding the alley where many of the deaths would occur.

People poured into one particularly narrow and sloping alley, even after it was already packed wall-to-wall. Social media footage showed some people trying to scale the sides of the buildings to escape the increasing pressure, as others shouted, cried or cursed.

When those at the top of the slope fell, it sent people below them toppling over others, witnesses said.

“We arrived around 10pm to go to a club but then saw people falling on the street,” said Moon Ju-young, 21. “Some were bleeding, others were crying out in pain.”

One student from France, who asked not to be identified because of the trauma of the event, said he became lodged in a crush of people for about an hour and a half.

“I wanted to go to a safe place but it wasn’t possible,” he told Reuters. “I was just pushed by everyone and I just couldn’t do anything.”

He said he came out with chest pain and a hurt ankle, but felt sorry for those who were killed or more seriously injured, as well as the emergency workers who desperately tried to free people.

He felt less sympathetic towards those who continued trying to push their way through the crowd, often complicating the task of rescue workers who told the throng to remain calm and in place.

“I’m upset against them because they pushed everyone and they didn’t realise,” he said.

Videos shared on social media showed a pile of bodies wedged between buildings, some at the bottom appearing unconscious, while others reached out to emergency workers who struggled to free them from the crush.

“A person right next to me fell, but then people behind me continued to push me, then more people fell down and kinda piled up on one another,” said a 30-year old graduate school student from Seoul. “I screamed at people who were pushing me: ‘Don’t push! People fell!'”

One woman said her daughter, pulled from the crush of people, survived after being trapped for more than an hour.

Moon, the young man who witnessed victims on the street, said onlookers appeared to add to the confusion as they sought to help friends.

“There were some people who tried to forcibly cross the police line saying they have friends over there, and they were dragged out by police,” Moon said.

Authorities had predicted up to 100,000 people would join the festivities, the first without major Covid-19 restrictions since the pandemic began in 2020.

But they said it wasn’t deemed necessary to deploy more officers to the area than usual for a Halloween weekend, which typically also draws TV stations to cover the crowds and colourful costumes. Witnesses said it was hard to detect a major police presence amid the throngs of people.

“Many people gather for Halloween every year but there were just so many last night, incomparably more than before COVID, so I could not identify who are police and who are not among the crowd,” said a woman in her 20s who said she lived in the neighbourhood but declined to give her name.

The father of a woman in her 20s who died in the disaster said the city’s preparations for the gatherings were inadequate.

“It was expected that there would be a crowd of 100,000 or more in the Itaewon area this weekend,” he told Reuters as he stood in a Seoul funeral home to collect his daughter’s body.

“I think there was no preparation for this, which led to this disaster.”

Social media footage showed personal belongings and other debris scattered across the site of the incident, with firefighters administering CPR to people lying in the street and police fighting to keep crowds back.

“I managed to escape the scene,” the graduate student said. “But if I’d stayed there just a few more minutes, then I would not have made it out, but would have died there.”

MoU of Cambodia swiftlet nest exportation to China was signed