‘How do you shoot my baby?’ Medic finds out daughter was killed at Texas massacre while attending to her best friend 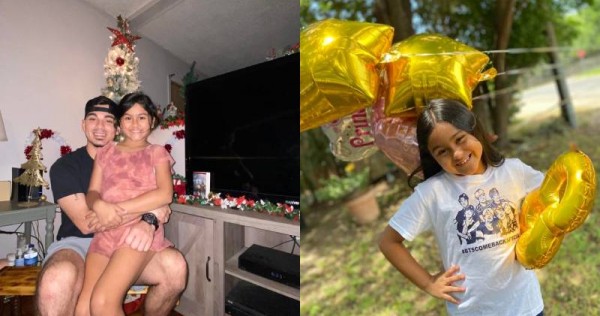 It was just like any other Tuesday morning for Angel Garza, who woke up early to drop his daughter Amerie Jo Garza off at school.

That would turn out to be the last time this father would ever get to see or hold his 10-year-old again.

That morning (May 24) a 18-year-old gunman opened fire on a classroom of elementary students at Robb Elementary School in Uvalde, Texas, leaving 19 children and two adults dead.

Garza, a medical aide, was called to the scene to assist in the mass shooting’s aftermath.

Seeing a little girl “covered in blood” from head to toe, he went to her and asked her if she’s okay, Garza related in an interview with CNN’s Anderson Cooper live on-air on Wednesday.

‘She just wanted to save everyone’—The father of Amerie Jo Garza, one of the victims in the Robb Elementary School shooting in Uvalde, told CNN’s Anderson Cooper how his daughter tried to save her classmates

“She was hysterical, saying that they shot her best friend, that they killed her best friend, she’s not breathing and she was trying to call the cops,” recounted Garza, as his shoulders started to shake uncontrollably during the interview.

“I asked the little girl what’s her name and she said, she told me, she said ‘Amerie.”

That’s when Garza’s heart dropped, because as it turned out, her best friend was none other than his daughter.

During that interview, this father broke down and had to take a few seconds to compose himself, adding that Amerie was the sweetest little girl who “did nothing wrong”.

“I just want to know what she did to be a victim,” added Garza as he fought back his tears.

“How do you look at this girl and just shoot her? Oh my baby. How do you shoot my baby?” Garza later on continued in the interview to sob as he hugged a photo of his daughter winning an honours award.

Amerie’s grandmother, Berlinda Irene Arreola, told news site The Daily Beast that her granddaughter was fatally shot while in the midst of attempting to dial 911 on her phone.

As Garza mourned for his daughter on Facebook, he also showed his appreciation to those that had tried to find out about his daughter’s whereabouts.

“My little love is now flying high with the angels above,” Garza wrote on Facebook. He also took the time to remind others of a very important message. “Please don’t take a second for granted. Hug your family. Tell them you love them.”

Amerie’s mother, Kimberly Garcia, posted on Facebook that she will never comprehend the loss of her daughter.

“You did not deserve this my sweet baby girl,” she wrote. “How am I supposed to live life without you? I will never understand. I love you and I’ll never be the same, ever again.”

Amerie was one of 21 people who were killed in one of the deadliest school shootings in US history since 2012, when 26 children and adults were killed at Sandy Hook Elementary School in Newton, Connecticut, Reuters reported.

The news agency also added that the gunman — who had posted his intentions on social media beforehand —  barged unchallenged through an unlocked door, then killed 19 children including Amerie and two teachers while holed up in their classroom for an hour before a tactical team stormed in and killed him.

The school district in Uvalde has a standing policy of locking all entrances, including classroom doors, as a safety precaution.

But one student told Reuters some doors were left unlocked the day of the shooting to allow visiting parents to come and go for an awards day event.

Investigators were still seeking a motive for this massacre.