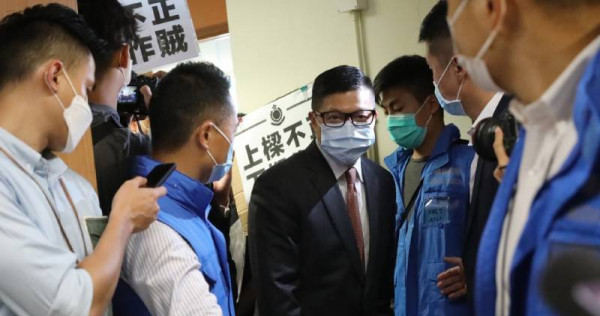 A teenager who said she was gang-raped by officers inside a Hong Kong police station last September has accused the head of the force of trying to discredit her when he publicly said she was wanted for giving a misleading statement.

The young woman and her lawyer also said they only learned about the police’s plan to arrest her from the media on Tuesday.

In a rebuttal issued on Wednesday, the teenager also revealed that the authorities had decided not to pursue her complaint any further. She criticised the force, saying it had failed to investigate her case “impartially, in strict confidence and with respect for my privacy and dignity”.

The accusations, made in a statement on the law firm’s Facebook page, came a day after Commissioner of Police Chris Tang Ping-keung told a Yuen Long District Council meeting that the young woman was now a “wanted person” and the force was planning to arrest her on suspicion of misleading officers.

Tang also said she had “absconded” and suggested she had fled Hong Kong.

The statement read: “Yesterday I learned from media reports that the commissioner has publicly said that I am facing arrest for ‘making a false statement’. He again chose to do so publicly, in a manner which any objective observer would be driven to conclude was directed at discrediting me.”

The young woman alleged she was raped by officers inside Tsuen Wan Police Station on Sept 27, and reported the incident to police in October. Because of an anonymity order granted by the court in November, the teenager could not be named or identified publicly. She is known as Ms X.

In response to a request for additional comments, her legal representative, Michael Vidler, said: “I can confirm that neither my client nor my firm has received any notice from police that she has been under criminal investigation, let alone is a wanted person … [My client] learned of being a wanted person for the first time [on May 12].”

In her statement, Ms X also claimed her case had not been handled properly.

“Seven months ago, I plucked up all my courage to file a complaint of rape and sexual assault by unknown police officers inside Tsuen Wan Police Station. I hoped and prayed that the complaint would be investigated impartially, in strict confidence and with respect for my privacy and dignity.

“None of that has happened,” the statement read.

Ms X also said the Department of Justice informed her lawyers on April 6 that her complaint would not be taken any further, because it was “contrary to evidence they obtained”.

“No particulars of that evidence have been provided despite requests by my lawyers so I have not been in a position to be able to convince the Department of Justice that my account is true; nor have I had any opportunity to refute the claim that my account is contrary to other evidence,” she said in the statement.

The statement did not mention whether she had left Hong Kong.

Ms X also issued a statement through her legal representatives in January, hitting out at Tang after the police chief disclosed at a Central and Western District Council meeting that the force was looking into whether the girl had given a false statement.

On Wednesday, the force did not immediately respond to a request for comment.