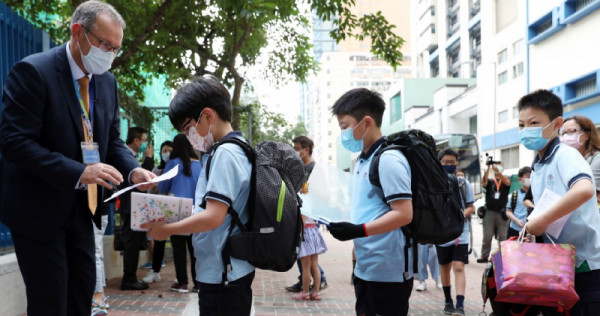 Pupils at some of Hong Kong’s international schools finally returned to the classroom on Wednesday after nearly four months away because of the Covid-19 outbreak.

Most students and their parents who talked to the Post said they were happy about the return to campus and were not worried about risks to their health, as they had confidence in the schools’ infection-control measures.

Under a phased class-resumption plan, international schools were the first to welcome pupils back because of their different curriculum and early summer break.

But for most of the city’s local schools, classes are only expected to resume from May 27, beginning with senior secondary students.

At least 53 international and private schools were given permission by the Education Bureau to resume classes in stages from Wednesday or Friday this week, while students at another 19 return to class next Monday, according to the government.

Half-day classes were suggested by education officials to reduce social contact and avoid students having lunch together, but 31 schools have been allowed to hold full-day lessons after implementing special lunch arrangements, such as splitting lunch break into two sessions for more flexibility.

At Christian Alliance in Lai Chi Kok, about 1,400 students were set to return in three phrases, beginning with pupils in Grade Four to Six on the campus for a half day in the morning, and Grade Nine to 12 in the afternoon.

“We will take every measure we can to make the school safe,” Richard Vanderpyl, the head of school, said.

“But if parents are still uncomfortable, they can keep their children home. We will provide resources for those students.”

Blended learning would then be carried out as about half of their some 100 students in Form Five were not in Hong Kong.

He said students staying in the residential area would have to limit their commuting, while wearing masks at all times was only required in the academic section, but not the residential section.

Edwards said most pupils were aged above 16 and the school trusted their maturity.

“We have actually analysed the risks, for the local students, they would be living on campus, rather than some of our students can take two hours to travel to a campus … as long as we put the protection measures in campus, we feel that it’s the most important,” he said.

Meanwhile, Hong Kong’s biggest international school operator, the English Schools Foundation, welcomes senior students back from Friday, with most of its pupils returning on Monday.