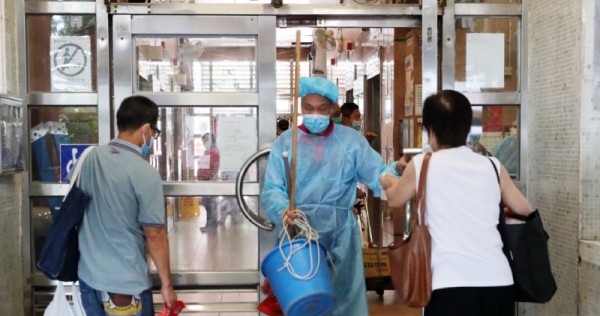 Hong Kong recorded 50 new cases of Covid-19 on Monday, according to a medical source, and the government was expected to announce a tightening of social-distancing measures later in the day.

With more than 30 per cent of new infections in the city proving untraceable, sources said government officials were meeting to discuss ways of containing the recent outbreak .

The city’s top epidemiologists have been split on how to contain the third wave of infections , and while some want a return of social-distancing rules to March levels as soon as possible, others doubt that would be sustainable in the long run.

Macau, meanwhile, took its own action on Monday, and anyone planning to travel to the city from Hong Kong via the Hong Kong-Zhuhai-Macau Bridge will now be required to have a medical certificate showing a negative virus test result.

Signs of a third wave in Hong Kong first appeared last week, with growing clusters in both Kowloon East and Sha Tin.

Between July 5 and 11, there were 211 confirmed cases and 143 local cases. Forty five, or 31 per cent, could not have their sources traced, according to Centre for Health Protection data.

Of the 38 confirmed cases on Sunday, 30 were locally transmitted and the source of infection in 13 of those was unknown.

The total number of infections in the city stands at 1,469, with seven related deaths.

Last week, the government reintroduced some social-distancing measures, including limiting the number of customers per table at restaurants to eight, and increased testing among workers in public transport, retail and care homes.

That response was not as stringent as those rolled out in March, the previous peak for infections in the city, when the daily number of local cases hovered around 20 a day. This was despite health officials calling the new wave of infections as the most severe.

Dr David Hui Shu-cheong, a government adviser and expert in respiratory medicine from Chinese University, and University of Hong Kong microbiologist Dr Ho Pak-leung, believe the time has come to return to the rules put in place in March.

“The current policies are inadequate, I think it’s a consensus among the public,” Ho said.

“We should not just look at the cases over the past week, but have to be forward looking. We should look at how the epidemic could further develop if we do not tighten the rules in all directions.”

Ho hoped the government would announce a tightening of rules by Tuesday, after a discussion with the Executive Council.

Measures should include limiting the number of diners at each table to four, asking civil servants to work from home, and closing some sports facilities, he said.

Hui agreed the government should act fast to cut the infection chain in the community.

“The largest problem is many of the cases cannot be traced … so if we do not tighten the rules, the chance of a great outbreak would be high,” Hui said.

However, Professor Yuen Kwok-yung, who is also a government adviser and a colleague of Ho’s at HKU, is not convinced another clampdown would be sustainable.

He said the government was adopting a milder approach to see if the situation got worse over the next five to seven days.

He added that tightening measures might not contain the spread of the disease.

“But what about after two months? When the government relaxes the measures and the infections will return again in September, do we need to fully suspend school classes and work from home again?” he said.

Hui said the government could wait for another couple of days, but did not think the number of cases would decline.

Health officials have said the new outbreak has put increasing pressure on the public health care system and the quarantine capacity, with a major facility in Fo Tan to be returned to public housing tenants next month.